The Succot holiday draws to a close. In Egypt, the festival was taken seriously, with succot (temporary booths) popping up everywhere to recall life in the wilderness for the Biblical Children of  Israel. Growing up in Cairo,  Levana Zamir remembers that even Christian and Muslim friends came to experience life in a succah. Interview with Rachel Avraham on Jerusalemonline (with thanks: ASF): 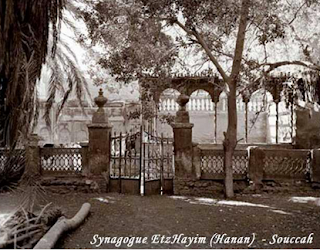 The Succah at the El-Hanan synagogue in Cairo (Photo: International association of Jews from Egypt)

Her memories of celebrating Sukkot in Cairo were even more vivid than they were for Yom Kippur: “All over the streets of Cairo, even in mixed areas, everywhere there were balconies that became sukkahs.   They brought in palm trees and put them on the balcony with white sheets.  My friends loved it for it was fun and nice to be in the balcony with us.  We had Christian and Muslim friends who were also aristocratic.   It was good.”

“Then, politics are politics and one day, all of this disappeared,” Zamir noted.  “The Muslim Brotherhood came to put bombs in the Jewish Quarter and all of this disappeared for we were afraid of what they could do to us.  Today, there are no more Jews in Cairo.  Only eight old women and one man in Egypt.  They have a president of a non-existing community.  It is very sad.  There is no more Jewish life not only in Egypt but also in all of the Arab countries.  There were a million Jews in Arab countries.”

“Until today in Cairo, the El Hanan Synagogue courtyard has the remains of a very big sukkah,” Zamir described.  “In every synagogue, they had a very big sukkah.  After the prayers, they went there for the Kiddush and the nice food.  You can see it is very old.    It was important to not only eat three meals in the sukkah but also the men and boys had to sleep in the sukkah.  It had to be very big.   We had a house in a suburb of Cairo and had a very big garden.  We had a large sukkah.  My father had to sleep there with the two elder boys.”

According to Zamir, the idea of sleeping in the Sukkah is a Mizrahi custom that is not practiced by most Israelis today: “In Israel, people mostly do not sleep in the sukkah.  I remember my mother told me that her father was living in the sukkah the whole time, like the people of Israel did in the Exodus.  They did not just eat in the sukkah.  It was their house.  They did the right thing, not like today.  We are building a sukkah for the children, not for us.  I am not talking about the religious people who do it based on those principles.  My husband always every year built a sukkah for the children.  When they left home, it finished.  We did not build a sukkah anymore.  It is a big difference.  There, we did it because it was part of our life as Jews.   That’s the difference between what it was there and what it is here.”

However, unlike Sukkot, where she feels that the way Egyptian Jews celebrated it in Cairo in the past was superior, Zamir believes that the experience of commemorating Yom Kippur in Israel is better than what it was in Cairo: “I like very much Yom Kippur here.  In the Diaspora, it was a normal day.  In Israel, all of the streets are empty and everyone is quiet.  It is something that is very special for Israel.  For me, it is very moving.  I knew it was not like that.   Egypt is part of the Diaspora.  My roots are there.  I was born there.  My character is more Mizrahi and Oriental.   Here in Israel, Yom Kippur is very moving.  I know that it is my place.   We need this.”

According to Zamir, Egyptian Jewish culture combined a strong commitment to Judaism with liberal values.   One day, she related that a group of Egyptian Jewish students asked a great rabbi if they could go to the cinema on Shabbat.   He replied that they could so long as they bought their tickets in advance.   Some of the Jews drove on the holidays, while others rode in special oriental carts or had chauffeurs.     Many Jews were forced to work or go to school on Shabbat because the day off was Sunday.   However, religious Jews used to try to work for Jewish companies so that they could keep Shabbat.

Read article in full
Posted by bataween at Sunday, October 04, 2015