From Alexandria to a transit camp

Yitzhak Gormezano Goren's novel " Alexandrian Summer", just released in English, recaptures the cosmopolitan ambience of Alexandria, 50 years before Tel Aviv. His writing is also a reaction to the pompous and self-righteous works of Amos Oz, David Grossman and others. Feature in Haaretz: 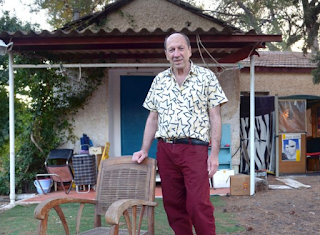 The 200-page volume depicting Gormezano Goren childhood in cosmopolitan Alexandria is also garnering renewed attention due to the growing interest among American Jewry to learn more about the culture of the Mizrahim (Jews with origins in North African of Middle Eastern countries). Moreover, in the wake of the book’s success abroad, Am Oved decided to publish a new Hebrew edition of it as well, as the original edition had long ago become a collector’s item.

Now American readers can also come to know the harsh criticism that Gormezano Goren expresses toward the Ashkenazi (Eastern European Jewish) hegemony. Starting in the 1970s – decades before the interest in Mizrahi culture became trendy in Israel and led to, among other things, the literary revolution provoked by Ars Poetica, a group of young Mizrahi poets whose works are aimed at reclaiming the Mizrahi voice and cultural heritage, while foregrounding the discrimination against minorities in Israel – Gormezano Goren was writing novels, radio sketches and plays that covered topics ranging from his cosmopolitan Egyptian childhood to his adolescence in an Israel rife with the sabra ethos.

“I come from a family of Spanish descent,” he tells me as we sit in the small living room of his home in Kfar Kish, a moshav in the Lower Galilee (he divides his time between here and an apartment in Tel Aviv); the walls are covered with pictures of his three children and 13 grandchildren.

“My parents were born in Turkey near the Greek border, and in the early 20th century, they immigrated to Alexandria, which was considered the city of boundless possibilities. If you were a foreigner – and not a native-born Arab – it was easy to do well. After she had already had three children, my mother had me when she was 33, which in those days was considered fairly old. I came to Israel with my family in 1951. My brothers and my sister have all passed away now. I’m the lone survivor of the nuclear family.”

In the opening scene of the documentary “’66 Was a Good Year for Tourism,” your brother Haim-Victor (father of the film’s director, Amit Goren) visits Alexandria after 40 years of living in Israel and the United States, and introduces himself as an Egyptian. How do you define yourself: Egyptian? Israeli? Both?

“I dedicated the new translation of ‘Alexandrian Summer’ to my brother, who left Israel and lived most of his life in America and always liked to say that he was a ‘citizen of the world.’ But the 13-year gap between us made all the difference. I came to Israel at age 10, and so it was easy for me to integrate into the society. You have to understand that I came from a cosmopolitan city that was a European-American bubble.

“I came from the future, and so I was an alien: Alexandria of the ‘40s looked like Tel Aviv of the ‘90s. There was rampant and hedonistic capitalism there. In Egypt, most of the children went to the French or Scottish school, but when I was a kid, I insisted on going to the Jewish school, which was excellent but less snobby. I had four hours a week of Hebrew, but when I got to Israel, about all I knew was the children’s song ‘Tu, Tu, Tu Bishvat.’”

Was immigration a traumatic experience for you?

“No, they put us in the Gilam ma’abara in Shfaram, which was mostly cabins. It was a strange situation: On the one hand, there was no electricity or running water. On the other hand, we managed to turn our hut into a nice place. My father and sister both found white-collar jobs – my father at Ford and my sister at Zim – and we lived on their two salaries. Really, financially speaking, we were much better off than a lot of the people who lived in the housing projects. We were in the ma’abara for four-and-a-half years, and at least twice a month I would go to Haifa to the Bat Galim swimming pool and afterward to a movie. When we moved, later, into a housing project, our economic situation worsened because we started to pay bills and a mortgage.”

Although the word “ma’abara” has become associated in Israeli discourse with a stormy debate over ethnic discrimination and subjugation, and a disregard for the needs of the immigrants from the Arab countries, the short documentary “Prince of the Transit Camp,” directed by Gormezano Goren in 2002, paints a more complex picture: The film opens with a shot of the pastoral woods that have grown over the site where the Shfaram facility once stood, and it continues with a voice-over describing how the immigrants from Egypt managed to preserve their cultural habits, including ballroom dancing on Fridays and card games – even in the new Israeli environment and in the unbearable heat, without basic infrastructure or electricity.

Following the publication of the English translation of your book, you wrote an article in which you argued that Israeli literature has an obsession with the Holocaust, the Palestinians and the kibbutzim.” Why do you think other kinds of content were so sorely lacking?

“I feel that Israeli literature is very limited. It’s very self-aware and wordy. I can’t read the author [i.e., Amos Oz] who’s considered a perpetual Nobel Prize candidate; his novels are so wearying. When these writers – Oz, A.B. Yehoshua, Yehoshua Kenaz, even David Grossman – speak, there’s always this feeling that they’re righteous prophets delivering an address to the world.”

So is “Alexandrian Summer” a reaction to Ashkenazi literature?

“I’d say it offers an alternative to the pompous style that was common in the 1970s. As a young man, I started writing in Hebrew and I wrote about Tel Aviv and Jerusalem. It never occurred to me that I could write about Alexandria. It was only after I went to America to study theater for a few years that I was able to get enough distance from the Israeli bubble and the ethos of the great melting pot and the trend toward dismissing the Diaspora: The Ashkenazim decided to disown their Diaspora, and they disowned mine as well in order to create a monolithic culture. It took me many years to realize there was a value to writing about my childhood in Egypt.”

Read article in full
Posted by bataween at Tuesday, October 06, 2015