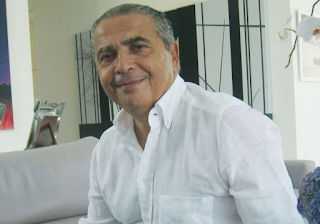 Pierre Besnainou moved to Israel as a result of antisemitism in France (photo: Gloria Deutsch)

When the former president of the European Jewish Congress and a leading light in the Paris Jewish community makes aliya and speaks of anti-Semitism in his native country, it is time to sit up and take notice. Gloria Deutsch reports in the Jerusalem Post:
Pierre Besnainou moved here with his family in April 2014 and took up permanent residence in the house in Herzliya Pituah which, until then, had been a holiday home only. He still has two daughters living in Paris but hopes they will soon follow him to Israel.

“Yes, unfortunately, there is anti-Semitism in France and during the past year it has increased a lot,” says the successful businessman, who was born in Tunisia in 1954. For many years, as co-chairman of the Anti-Semitism Task Force of the Jewish Agency, he actively fought anti-Semitism. He is also a member of the board of governors of that organization.

“The terrorism started with the events in Toulouse [the attack at a Jewish school in 2012] and continued with the whole Charlie Hebdo affair,” he says. “Unfortunately the Muslim population originating in North Africa has been brainwashed.”

This is particularly painful for Besnainou, who spent a happy childhood in Tunisia and remembers the peaceful coexistence between the Jews and Arabs of his home country.

“My children grew up in Tunis,” he says. “During the summer holidays, many French Jews went to Eilat, but we always went to Tunis and my kids had many friends there,” he recalls. He also dealt with Tunis in his first business venture and says he encountered anti-Semitism for the first time in France and not in his birthplace.

“Now it feels like a war, and the Jews of France are on the front line in this war,” he says. “However, the French government is very active in the fight against anti-Semitism and is determined to combat it with strong laws; that is a fact it’s very important not to forget.”

Read article in full
Posted by bataween at Wednesday, October 07, 2015