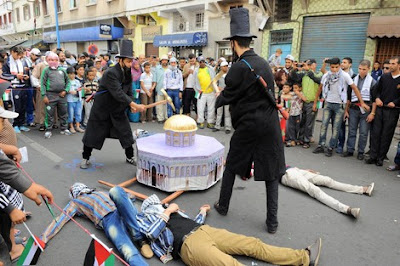 A scene from the antisemitic demonstration in Casablanca: top-hatted 'Jews' prepare to 'destroy' the mosque of Omar with axes

At least 3,000 Moroccans signed a petition condemning what they said was incitement to murder Jews on full display during a Palestinian solidarity demonstration in Casablanca this week. The Algemeiner quotes a report in the Egyptian newspaper Youm7.

The petition urged Moroccan authorities to hold rally organizers accountable for the mock executions of Jews and other inciting displays, which it called illegal. Also identified by the petition, which was titled “Moroccan Citizens Gathered Against Incitement to Kill Jews in Morocco,” were demonstrators dressed as Palestinians, with assault rifles pointed at others dressed as Orthodox Jews, and children trampling on the Star of David.

Video footage from the demonstration, reported by The Algemeiner, showed children marching and shouting “Death to Israel!” and “We will sacrifice our soul and our blood to you, Al-Aqsa,” in reference to the holy site also known as the Temple Mount.

Signatories expressed concern about the reaction of Morocco’s Jewish community, which today numbers under 3, 000, and said the demonstration had offended many Muslims as well. They said antisemitism threatened the pluralism and tolerance enshrined in Moroccan law.

Interesting how they chose to portray Jews as Ashkenasi Chasidic

The worst "kish" redition of Abraham Lincoln ever. This is the worst re-enactement I have seen in years. Do the Ashkenazi Jews wear stovepipe hats? I really thought it was Lincoln first.

Well I guess Abraham Lincoln's America is under the grip of Zionist Kabale.

These Moroccans are very stupid. Well, there goes their understanding of wardrobes.