Helping Syrian refugees is the right thing to do, but the thought that they may be the descendants of those rioters who smashed up the synagogue in Aleppo and forced the great majority of Jews to flee in 1947 does not make Lynette Nusbacher feel any less uneasy. Read her blog in The Times of Israel (with thanks: Michelle): 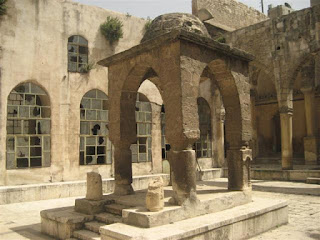 Courtyard of the Great synagogue in Aleppo, partly destroyed in 1947

As the kids made their posters for the collection, I was not entirely happy. I was thinking about other Syrian refugees. I was thinking in particular about the Jewish population of Aleppo who were hounded out of their homes in 1947.

There had been a Jewish community in Aleppo almost as long as there have been Jews (as long as, according to local legend, the time when the locals drank milk from Abraham’s goats, giving the city its name). In the 1490s, Aleppo had received large numbers of Sephardic refugees from Spain and Portugal (whose descendants maintained the tradition of a ninth Chanukkah candle to commemorate their acceptance by the Aleppo community), but remarkably maintained a separate synagogue service that preserved the pre-Sephardic rite of the congregation.

The Jews of Syria became increasingly uncomfortable during and after the period of direct rule from Vichy and later by the Free French. It is estimated that 4,500 Jews moved from the ancient Syrian communities to British Palestine between 1942 and 1947.

The excuse for the organized mob violence in 1947 was the United Nations vote at Lake Success, New York, to partition the western coastal strip of Palestine between a Jewish state and an Arab state. It is very likely, however, that the pogrom was a deliberate part of the “Arabization” policy that the Syrian state had been pursuing over the year since the French evacuated the territory of their expired Syria mandate. The pogrom in Aleppo may have been worse than the one in Damascus because the ‘Alawis of Aleppo might have felt the need to show themselves to be just as Arab as their more orthodox Muslim neighbors.

A large proportion of Aleppo’s prewar Jewish population of 10,000 fled the violence and destruction of communal institutions and personal property. The remainder were effectively internally displaced and ransomed by private Canadian funds over the ensuing decades. The Assad regime ended the prohibition on Jewish emigration in 1992 under pressure from the United States. By that time very few remained.

Almost none of the refugees from Aleppo and Damascus was resettled in Europe. The largest number were resettled in Israel and the United States, with most of the remainder in Mexico, Panama and Brazil. The one place in Europe where Syrian refugees found a home in any numbers was among the Sephardic Jews of Manchester.

How we do know they have changed?

Israe's first and foremost obligation is to the ingathering and survival of the Jewish people.

A nation must preserve its national identity and territorial integrity or perish.

We have seen multi-cultural Europe belatedly awaken to the fact the nation-state is still the basis of human life.

Like or it or not, the different peoples of the earth won't be other than who they are in their national outlook and this will be true even in the Messianic Age.