When Israel was one large refugee camp

The current refugee crisis in Europe has evoked memories among Jews in particular. More often than not, the comparison is made with Jews desperate to flee the Holocaust. Overlooked is the fact that in Israel's early years, refugees, mostly from Muslim countries, outnumbered residents. Lyn Julius writes in the Huffington Post:

Israel itself was one large refugee camp in the 1950s and 1960s. The sight of row after row of tents filling our TV screens recalls the ma'abarot, hastily erected "transit" camps of fabric tents, wooden or tin huts. These were conceived by Levi Eshkol of the Jewish Agency to provide temporary housing and jobs. The first ma'abara was established in May 1950 in Kesalon in Judea.

In 1964 1.3 million Israelis went to see the cinema box office hit Sallah Shabati -- a satire about a bearded Yemenite immigrant who has just arrived in the promised land with his seven children and pregnant wife. Sallah -- played by Topol, who would later achieve global fame as Tevye in Fiddler on the Roof -- uses all his wiles to try and make money and move into better housing. His name is a pun on words: "Sorry I came".

The EU as a whole, with a population of over 300 million, is taking in as many immigrants today as Israel, a country of half a million, absorbed in the early 1950s. As well as 100,000 Holocaust survivors, the tiny struggling country took in 580,000 Jewish refugees from Arab countries. By the 1960s, the refugees had tripled the country 's population. 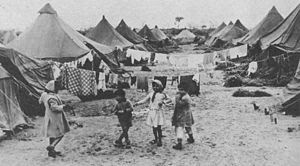 Children playing in a ma'abara

These Jews were destitute, escaping violence and persecution in Arab countries with nothing but a small suitcase and the shirts on their backs, having been stripped of their livelihoods and property. They had often left behind flourishing businesses and comfortable homes. There was no question of a "right of return" to countries where mobs went on the rampage shouting "Itbach al-Yahud" ("Slaughter the Jews"), money was extorted from them and they could be arrested on the slightest suspicion of being a "Zionist spy". The UN did nothing to ease the burden, and still today, the world remains oblivious to these refugees' existence.

The size of Israel's endeavor was staggering. A nation of 650,000 absorbed 685,000 newcomers, some arriving with trachoma and TB. During the first years of statehood, roughly two-thirds came from Muslim countries.

Conditions were deplorable. Too hot in summer, too cold in winter, exposed to the wind and the rain. Everything from food to detergent was rationed. Refugees had to line up to collect water from central faucets. The water had to be boiled before it could be drunk. The public showers and toilets were rudimentary.
The 113 ma'abarot housed a quarter of a million people in 1950. Slowly the ma'abarot turned into permanent towns. Some residents stayed in the camps for up to 13 years.

Often the newcomers had no say where they were resettled. Large numbers, especially North African immigrants, ended up on the country's periphery in dusty development towns in the Negev desert or on the Lebanese border. Western immigrants secured housing in the cities of the coastal plain, food and jobs through personal contacts which the immigrants from Muslim lands lacked. Yiddish speakers were given preference over the easterners when it came to employment. Such was the shortage of jobs that some Moroccan refugees were made to cart grass from a neighboring kibbutz to Ashdod beach.*

In spite of lingering resentments, the absorption of one of the largest numbers of refugees in proportion to the host population has been an astonishing success. Later, Ethiopian refugees and a million Soviet Jews brought their own challenges. By then, however, the country was a great deal more prosperous, and the refugees were sent directly to absorption centers. They were encouraged to attend total immersion courses in Hebrew and given money to help them afford a permanent home.

Sallah Shabati captures the culture clash between the petty Ashkenazi (western) bureaucrats and the eastern refugees. Political parties come to the ma'abara to court people who have never lived in a democracy for their votes. Sallah himself has to climb a steep learning curve. The refugees press on and build new lives for themselves. Sallah's children fall in love with Ashkenazi kibbutzniks next door, prefiguring the 25 percent intermarriage rate in Israel today. It's a story with a happy ending: no matter the tribulations, Sallah is not sorry he came.

Naughty do not compare, What did the Yishuv think would happen when the State of Israel came into being.That the Arab states would allow their Jewish citizens to continue to remain in their homes, I think you are naive. But allowing for 'realpolitic' to then treat these refugees like shit is and was unforgivable.And then to make a film that makes light of this ill treatment of Jewish communities who had existed for 1000's of year. The sense of arrogance of the East European Western Elite was mind blowing especially when you consider their so called superiority was no different from their neighbors who had quiet happily sent millions of the fellow countryman to the gas chamber. The first generation of these communities who were born in the 'promised land' were stripped of all their heritage and brought up like good little yekkies.
It is only in the past 10 years that the Sephardi communities have reclaimed their ancient heritage, we now have middle eastern music, we now eat middle eastern food.. we are in the middle east not a suburb of Berlin

To anonymous. This reply is coming from someone who is of mixed Ashkenazi and Sephardi (not Mizrahi) heritage. I agree with most of what you said. However, when you allude to Sallah Shabati, I have to differ. That film is a satire. And satires do what satires do. If anything, it also shows the utter arrogance of the Western Ashkenazim. "Sorry I came" is an aptly named title that captured the anguish of the Mizrahim. Except for a minority, most of the Mizrahim that I met were, and are, anything but "good little yekkes". And I can tell you from personal experience that their ancient heritage was starting to be reclaimed since the early 80s, not in the past 10 years. This process is still going on however. I'm still waiting for the Palestinian Jews, who have lived in Israel for thousands of years collectively, to reclaim THEIR heritage.