Turkish Jews :between antisemitism and assimilation

Turkish Jews aren't leaving en masse yet - they are adopting a wait-and-see attitude. But the community is caught between the rock of rising official antisemitism and the hard place of sky-rocketing assimilation. Perceptive article by Avi Lewis in The Times of Israel:

ISTANBUL — Gaining entry to Istanbul’s Bet Yisrael Synagogue can be quite an ordeal.

Located on an empty, nondescript street patrolled by armed guards, visitors are required to pass through two bomb-vault doors and a metal detector, weeks after presenting their passports for a security clearance.

Once inside, a handful of worshipers – mostly aging – are spread out across the vacant seats as a young cantor hums traditional Sephardic melodies.
The feeling of walking into a fortified cavern is augmented by the synagogue’s lack of windows.

Every seat is equipped with a helmet underneath: “Just in case there’s an earthquake,” one congregant tells me jokingly — a wry nod to the truck bombings, carried out by al-Qaeda in 2003 outside this shul and Istanbul’s Neve Shalom Synagogue, that killed 27 and injured 300. A conspicuous number of cameras — inside and out – link to a security room on site.

After the Friday night prayers, all worshipers remove their yarmulkes and replace them with baseball caps, or simply leave the synagogue bare-headed.

Pouring out onto the street with the guards grimacing nearby, the atmosphere seems relaxed and convivial. For a moment, the balmy summer night exudes a whiff of Tel Aviv. But the crowd quickly disperses, leaving the street as empty as before. 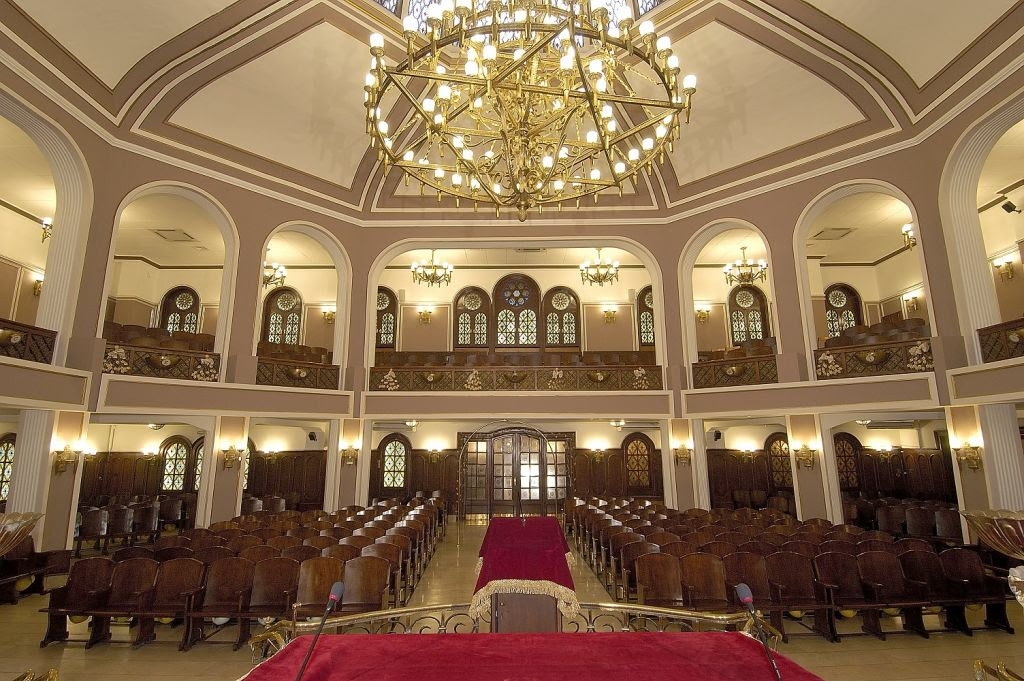 Interior of the Neve Shalom synagogue in Istanbul, Turkey. Every seat is equipped with a helmet underneath.

While outbursts of anti-Semitic rhetoric and growing hostility toward Israel under President Recep Tayyip Erdogan make the 15,000-strong community increasingly uneasy, some Jewish leaders say they are just as concerned over assimilation, intermarriage and emigration.

But they remain adamant that Jewish life will persist here, regardless of the growing intolerance and Islamization of Turkish society.

A spokesman for the Jewish community’s official mouthpiece says Turkey’s Jews are dismayed by the uptick in anti-Semitic speech and media articles, but still try, in their limited capacity, to bring these issues to the attention of the public and government to solve them via the legal system.
“Anti-Semitism and rising hate speech (conspiracy theories, etc.) are issues for Turkish Jews and we feel the threat,” a spokesman from Turk Musevi Cemaati, the Turkish Jewish Community, says in an email. (Perhaps a case in point: The group and others interviewed asked to review the article ahead of publication before consenting to speak due to previous incidents.)

The spokesman adds that the community’s leaders are lobbying the authorities to crack down on the phenomenon.

“We still believe in a future in Turkey,” he says.

Indeed, Turkey’s Jews aren’t leaving en masse — yet. The emigration rate stands at an inconsequential 120 people per year (0.8 percent), according the community umbrella group. And for those who do mull an exit, the Jewish state is not always the primary choice. The United States, Canada and Europe are also popular destinations due to the education and economic opportunities they offer, with one in every four Jewish students leaving to pursue higher education abroad.

But Israel still remains a cornerstone of the community, and Turkish Jews feel more and more alienated as their support for the Jewish state is questioned and denounced by an increasingly hostile society.

Read article in full
Posted by bataween at Friday, September 04, 2015

Wow. I'm also surprised they are not leaving for Israel. Economic issues, I get it, yet I wish they could understand how far along in history we are and things are rapidly changing.
It's time to get to Israel. The geulah is approaching...

At best, half of any oppressed and harassed population would leave no matter what. So all you're banking on is 12 or 13 souls wise enough to flee.