In keeping with the regime's official distinction between Jews and Zionists, and in order to project an image of tolerance,  Iran's president Rouhani tweeted a Happy New Year to the Jewish people (whether he Tweeted greetings last year is a matter of controversy) . There are thought to be only 8, 500 Jews in Iran out of a 1979 community of 100, 000. The Times of Israel reports: 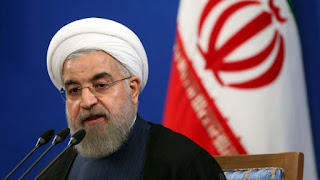 In a message on his official Twitter account, Rouhani wrote: “May our shared Abrahamic roots deepen respect and mutual understanding. L’Shanah Tovah. #RoshHashanah”

The message was accompanied by a 2006 Reuters image of Jews praying in Yousefabad Synagogue in Tehran.

L’Shanah Tovah is Hebrew for, May it be a good year. Iran had between 80, 000 and 100, 000 Jews before the 1979 Islamic revolution but most have since fled, mainly to the United States, Israel and Europe.

There are now only about 8, 500, mostly in Tehran but also in Isfahan and Shiraz, major cities south of the capital.

This is not the first time that a Rosh Hashanah greeting has been attributed to Rouhani. In 2013, a message claiming to be from Rouhani was posted on Twitter, reading “As the sun is about to set here in Tehran I wish all Jews, especially Iranian Jews, a blessed Rosh Hashanah.”

Read article in full
Posted by bataween at Tuesday, September 15, 2015

presumably motivated by Barack Obama's Rosh Hashana greetings and about as compelling.

An Iranian President with purportedly 20 000 Iranian Jews in his country spells the Rosh Hashana greetings the way an American Reform (or Conservative/Reconstructionnist) Jew would. Isn't that odd?
An Iranian/Sephardi/Orthodox jew would have suggested "Shana Tova" or "Lshana Tova". No apostrophes.

I meant "LEshana Tova". No apostrophes.