It takes  a Moroccan Muslim, on a mission to build peace between peoples,  to rebut the lies being disseminated against Jews and Israel. For instance, the news that 30 Moroccan Jews had been sent to an IDF training camp in Israel. In fact, it was a summer camp with sporting activities, writes Amine Ayoub in the Jerusalem Post. 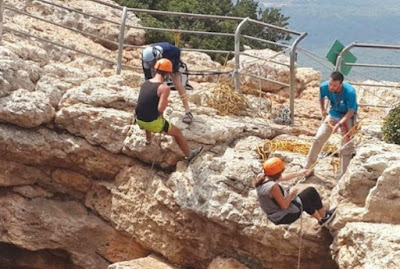 Rock climbing at a summer camp in Israel

"Being raised Muslim in Morocco, I did not really get a chance to meet many Moroccan Jews. Even though Jews and Muslims have co-existed in Morocco for a long time, that doesn’t necessarily mean they like each other.

We were raised with the idea that the Jews are evil, satanic. As a kid when you did something bad you would be called a Jew. We were programmed with Jew-hatred.

While attending a Catholic boarding school in the United States, I had my first opportunity for an encounter with a Jewish family. The decision to go took me longer than it should.

I had to think twice, about whether God would be mad at me, or whether my parents be mad at me. I finally decided to attend that dinner; after all I was attending a Catholic high school. Everything went great and all the propaganda that surrounded me in my younger years appeared surely to be false.

Well, 16 years after that dinner, I have suddenly decided to act. The hate and misery in this world is too much and I cannot stand it anymore.

Thinking of Israel and Zionism for a while made me look into this a little deeper. How could a small country that we hear only evil of, and with many enemies, have survived and even thrived the way it has? Many countries in the region are not even close to the economic prosperity and democracy of Israel.

I read about the Fortune 500 companies investing in Israel, about the booming biotech and hi-tech industries and recently about the Israeli pharma Giant Teva’s multi-billion dollar deal with Allergan, and questioned this multitude of successes.

(Of course great news like this is hard to find; it does not include killings and bloodshed.) After some hesitation I decided to send a short video to the NGO Stand with Us showing my support for Israel and my stance against the Boycott, Divestment and Sanctions (BDS) movement.

As a proud Moroccan and a practicing Muslim, I employ logic and common sense more than anything else. Bringing historical hatred and religion into this conflict just makes things more complicated. Of course there are political issues that should be solved by the two interested parties with the involvement of the international community. Israel exists and the BDS movement wants only one thing: to erase Israel from the map. Many people don’t actually know that hurting Israel economically is hurting the Palestinians too.

WHEN IT comes to Morocco, the Jewish community settled here more than 2,600 years ago. When asked about the Moroccan Jews by the Nazis, the late king Mohamed V replied that he had no Moroccan Jewish subjects, only Moroccan ones. In the 2011 Moroccan Constitution the Hebraic culture was mentioned as part of Morocco’s cultural diversity, from the Amazigh in the Atlas Mountains to the Hassani in the Moroccan Sahara.

Even tough there are no official diplomatic relations between Morocco and Israel, according to Israeli statistics there are Moroccan visitors to Israel in the thousands and economic exchanges in the millions of dollars yearly.

Jews have been coexisting for years with their fellow Moroccan Muslims, but recently as the number of Moroccan Jews significantly decreased and pan-Arab movements have been spreading false propaganda, many are cautious when discussing Jewry or Israel.

The latest such propaganda was about the 30 young Moroccan Jews who visited a summer camp in Israel.

All the newspapers in Morocco have been discussing this visit lately, and some are stating that it was an IDF training camp. Some NGOs went as far as stating that these kids should be prosecuted as terrorists. The way reporters are bluntly stating wrong facts is shameful and unprofessional.

When a regular Moroccan hears such reports, what do you expect from him? To love Israel? If we look up the camp’s website, it is a regular youth camp that charges a fee to attend. Even Moroccan Muslim kids can attend if they pay the fee. The young Jewish people may have been sponsored by certain organizations, but the program was still the same for all attendees, with sporting activities and no military exercises.

This is just one example of the propaganda that is being spread, and voices of rebuke, such as mine, are scarce.

Read article in full
Posted by bataween at Thursday, September 03, 2015