As the daughter of a communist, Magda Haroun, leader of Cairo's Jewish 'community' - eight elderly ladies - resents the creation of Israel which she sees as partly to blame for the extinction of her community. But those 'Egyptian patriots' who refused to leave were victimised as well. In  the next breath, the article mentions that the Copts, who have no Israel to resent - were also persecuted. Somewhat lazy article in Time magazine by Jared Malsin: 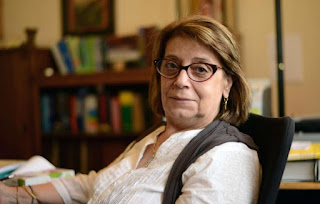 
Despite their invisibility today, as recently as the mid-1940s, Egypt’s Jews made up a diverse and vibrant community that at its peak numbered more than 80,000 people. Egyptian Jews were writers, film directors, business figures and political activists.

They were also icons of a long-gone cosmopolitan era in Egyptian culture. Jewish-born singer and actress Laila Murad was a towering figure in midcentury Egyptian film and music. One of Murad’s associates was Togo Mizrahi, an Alexandrian Jew of Italian lineage and who was considered one of the founding fathers of Egyptian cinema. Mizrahi who directed films like Cocaine a 1930s tale of murder and drug abuse.

That cultural flourishing ended soon after the 1948 war that birthed the neighboring state of Israel. Coinciding with a surge in Egyptian nationalism in the 1950s, in the years following the overthrow of the British-backed monarchy, Egypt’s President Gamal Abdel Nasser began a mass expulsion of Egyptian Jews, sending many to Europe, Israel, and the US. Some settled in places like Paris, Cyprus, and the San Francisco Bay area.

The expulsion continued for years, draining the community. In the 1950s, some Jews were issued one-way travel documents called “laisser-passer,” while others were stripped of their property. By the end of subsequent wars with Israel in 1967 and 1973, only a few hundred Egyptian Jews remained in the country, doing their best to continue daily life in a community now a fraction of its former size.

Madga Haroun’s family is one of those that chose to remain. Her father was a communist who worked in an intellectual property firm, aiding patent and trademark applications. After attending university in Cairo, she eventually took over the family business. One of her sisters later moved to Europe, but she decided to stay. (I could find no proof of the existence of this sister - ed)

Following the Rosh Hashanah service, the congregation moves to an attached building for a reception. In addition to apples and honey, the traditional Rosh Hashanah snack, the spread includes red wine in small plastic cups, pomegranate seeds and dates—“a symbol of Egypt,” says Haroun. (These foods are eaten as part of the Sephardi Seder, not just by Egyptian Jews - ed)

And Egypt is Haroun’s country. After the reception she sits smoking a cigarette and sitting on the stone steps of the Synagogue courtyard. The yard is dimly lit and guarded by a permanent police checkpoint. “I had my first love here. I had my first boyfriend, my first deception.” She laughs with a smoker’s rasp. “It’s my home, why should I leave? And my father felt the same.”

As she speaks, a young Cairene couple walk in from the street, strangers come to wish her well on the holiday.

Haroun sees the Egyptian Jewish community as an accidental victim of regional politics. “I myself am resentful to the state of Israel. Because is if we are like this today, it is part because of the establishment of the state of Israel, and part the politics of the Arab countries, which contributed to the idea of Israel.”

In Haroun’s view, the creation of Israel upended regional politics and led to a backlash in Arab states, which then moved to outright expel or pressure their Jewish minorities. The simmering conflict between Israel and nationalist Arab regimes left some Middle Eastern Jews with an impossible choice: their religious affiliation or their homelands.

Many of the Jews who remained in Egypt refused that choice, instead insisting on the their place in Egypt’s culture and history, even as the accepted notion of what it meant to be Egyptian narrowed, excluding the Jews. Haroun only has Egyptian citizenship, and like all Egyptians, her religion is printed on her national ID card, a fact that sometimes elicits disbelief—many Egyptians simply can’t believe that there are Jewish Egyptians. “Sometimes at the bank, they say, ‘We have to have the permission of the embassy.’ I said, which embassy? I didn’t know that Egypt has an Egyptian embassy!”

Jews are not the only religious minority to have faced persecution in Egypt. The country’s Coptic Christians say they are regarded as second-class citizens, barred de facto from the top ranks of the military, harassed by the security forces and menaced in some parts of the country by jihadists. Egypt’s Bahai’s and Shia communities have also long struggled for rights under a state that refuses to recognize them.

Haroun says the Egyptian government no longer threatens the few remaining Egyptian Jews with expulsion or other punitive measures, but little can be done to reverse the community’s impending extinction. That extends to her own family. Haroun’s first husband was a Muslim, and so is her daughter. Her current husband is Italian and a Catholic. “We are the only house in Egypt where the three religions are living under one roof,” she says.

Magda Haroun feels burdened with the task of presiding over the last days of her community. “I’m sick of it,” she says. “Sometimes I wake up in the morning and I’m crying. Because I don’t know what will happen. When the phone rings, I don’t know who died, who is sick. It’s very hard to explain. It’s very heavy. It’s very sad. It’s very frightening.”

Yet she is still intent on proclaiming the legacy of Egypt’s Jews even to their dying days. When the previous leader of the Cairo Jewish community, Carmen Weinstein, died in 2013, Haroun labored to make the funeral an event attended by local and foreign officials, along with a rabbi flown in from Paris. Haroun’s sister and the deputy leader of the community died in 2014, and Haroun again helped organize a major funeral with a police escort. “I made a point,” she said. “We are going, but we have to go in glamour.”

“Unfortunately it’s a funeral. We won’t have weddings, but we will be acknowledged, and I will fight until the end that our presence is acknowledged in history.”

The approaching end of Egypt's Jews, by an Egyptian Christian

Magda Haroun is an excellent example of Stockholm syndrome in its most severe form.

She married non Jewish twice. She can't complain about there being few Jews left. Better not to have married at all than marry non Jewish in this circumstance. Her daughter is halachly Jewish as well as Muslim but she has been brought up Muslim so now there is one less Jew in Cairo, if she is that concerned about it

If she keeps repeating that this is the end of the Jews in Egypt, then that buys time for her daughter.
--- malca