Over the Jewish Holydays this year, Mahmoud Abbas attempted to spark an intifada by spreading  rumours that the Jews were plotting to destroy the Al-Aqsa mosque in Jerusalem. This strategy is not new, but dates back to the time of the Mufti of Jerusalem, Haj Amin al-Husseini. Then the accusation was that the Jews were plotting to take over the Arab world. Dr Edy Cohen explains on i24 News: 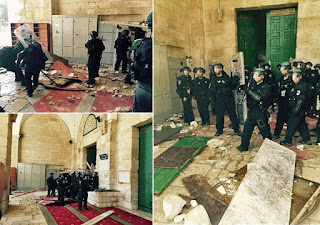 
In fact when Herbert Samuel appointed al-Husseini to the position of mufti in 1921, the latter set himself the goal of the expulsion of Jews from Palestine and preventing them from reaching it, but he did not have the powers to deal with thousands of Jews or the implications of the Balfour Declaration and the British aid to Jews. The mufti's position was weak and his allies conflicted and isolated.

Surrounding Arab countries were weakened, each busy with problems with the colonial powers. Politically and economically it was not a good time to organize a strike or buy weapons. The mufti therefore concluded that he must enlist the aid of the Arab and Muslim world, and unite them and bring them to the Palestinian issue with the aim to get the help of millions of Muslims around the world. How did the mufti go about this?

Like Abbas, the mufti sought to convince the Arab world that Jews plan to destroy the Al-Aqsa mosque and establish the Third Temple on the site of the Dome of the Rock, before conquering the rest of the Arab world. "Palestine does not satisfy the Jews, because the aim is to take over the rest of the Arab countries, Lebanon, Syria and Iraq and the region of Khaybar in Saudi Arabia, under the pretext that this city was the homeland of the Jewish tribes in the seventh century." Thus the mufti of Jerusalem said again and again.

The mufti's propaganda methods were varied, but the most effective one was sending envoys to Arab leaders. These messengers carried "evidence" of the intention of the Jews to "defile" the holy places of Islam, invoices and receipts supposedly attesting to the payments made on behalf of Jewish religious institutions. The leaflets were illustrated with paintings of the Western Wall and Temple Mount. These illustrations were decorated with Jewish religious symbols.

The materials caused anxiety among Muslim leaders in the Arab world. Moreover, the fact that Jews see the Western Wall as a holy site and a relic of the Temple worked up the Muslims' anxiety, and they rushed to the mufti's aid.
Much like the mufti, Abbas sees the al-Aqsa mosque as an instrument in his struggle and a means to enlist supporters in the Arab world and the international community to the Palestinian issue, which they already fed up with. But the ruse of crying that "al-Aqsa is in danger" and calls to come and defend the mosque through self-sacrifice and bloodshed, succeeded this time in the same way that it did last year – the question is how many more times will the world fall into the trap before everyone sees through it?

Read article in full
Posted by bataween at Monday, September 28, 2015

only slightly off topic//
Prof Jeffrey Herf scolds academics in the ME studies field, especially "Leftists," for overlooking the Nazi sympathies of the Arabs during WW2 and Mufti Husseini's collaboration with the Nazis and in the Shoah.

Ironic of course that Muslims are the ones who took over the Arab lands, not Jews. Jews were there first but the world believes their version