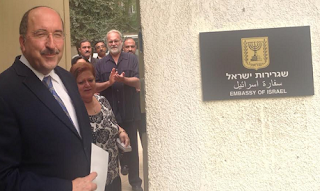 Israel's Foreign ministry director-general Dore Gold at the inauguration of the Israeli embassy in Cairo earlier this week.

After four years, the Israeli embassy is re-opening in Cairo, Egypt, Ahramonline reports. Initially, the embassy will operate from the ambassador's residence.

Israel has reopened an embassy in Cairo after four years of closure, the Israeli prime minister's spokesman to the Arab media, Ofir Gendelman, announced on Wednesday.

The Tel Aviv mission in Egypt closed its doors in the aftermath of the storming of its former premises in Giza in 2011 amid anti-Israel protests.
Gendelman added that Dore Gold, the director-general of Israel's foreign ministry, attended the re-opening ceremony along with Israel's ambassador to Cairo Haiem Koren.

"Under the leadership of prime minister Netanyahu and president El-Sisi we have seen off threats and we are working with Egypt to achieve stability in the region," Gold said at the event, adding that "Egypt will always remain the region's biggest and most significant country."

In September of 2011, a few months after the outbreak of the 25 January revolution, hundreds Egyptian protesters who were angered of by Israel's killing of six Egyptian border guards.

Read article in full
Posted by bataween at Friday, September 11, 2015