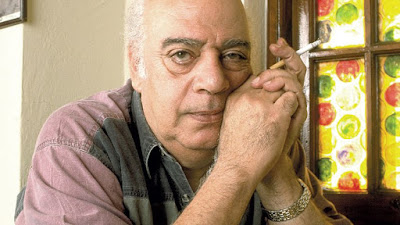 'Normalisation' between Egypt and Israel has lost one of its champions: the Egyptian playwright Ali Salem.

AP - Ali Salem, a famed Egyptian satirical writer whose works include one of the Arab world's most popular comedic plays, died Tuesday in his home in Cairo of natural causes, Egypt's state-run Middle East News Agency said. He was 79.

Salem's writings include 15 books and 25 plays. His most famous work was "School of the Troublemakers," a 1971 comedic play about a class of riotous teenagers reformed by a female teacher.

Salem courted controversy by visiting Israel in 1994, traveling by himself without even telling his wife or three daughters. He drove a car across the border after Israel and the Palestinians signed the 1993 Oslo peace agreements. He said he had been thinking about visiting the country since late President Anwar Sadat made the trip in 1977, leading to Egypt's becoming the first Arab state to sign a peace treaty with Israel, in 1979.

Salem's book "A Drive to Israel" sold more than 60,000 copies, a best-seller by Egyptian standards. But he was shunned in Egypt for the visit and fellow writers labeled him a sellout or collaborator.

Salem's calls for peace and normalization with Israel eventually caused him to be expelled from the Writers Syndicate, a move that was overturned by an Egyptian court. Immediately after the court ruling, he resigned from the syndicate, saying he only went to court to prove a point.

In 2008, Salem won the Civil Courage Prize from the U.S.-based Train Foundation, which said he was a "voice for peace and reason in the Middle East." The ceremony was co-sponsored by London-based Chatham House.

In later years Salem became a public critic of former President Hosni Mubarak. Salem spoke in support of the protest movements against Mubarak years before the 2011 uprising that ended Mubarak's 29-year rule.