One of France's best known singer-songwriters, Guy Beart, has died at the age of 85. A contemporary of Serge Gainsbourg - with whom he clashed - Beart told 'Actualite juive'that he was a 'joyful pessimist'. His mother had taught him Jewish rituals and the Bible influenced his lyrics. In Lebanon between 1939 and 1947, he felt the effects of Nazism. "There were refugees from all over the world there, including men in beards and 'pe'ot'" he said. One of his two daughters is Emmanuelle Beart,the actor. The Guardian has this obituary:

Béart was born Guy Béhart-Hasson, in Cairo, the son of an accountant and business consultant whose work took the Jewish family to Greece, Italy, the US, France, Mexico and Lebanon. At 17, Guy left Beirut for Paris to study at the prestigious Lycée Henri‑IV and later the Ecole Nationale de Musique.

His love of music – he studied the violin and the guitar – was matched by his passion for mathematics, and he also obtained a degree in engineering from the Ecole Nationale des Ponts et Chaussées. While taking a variety of jobs, including as a mathematics teacher, to support his family after the death of his father, he did the rounds as a singer in Parisian cabaret clubs and wrote songs for Juliette Gréco, Yves Montand, Maurice Chevalier and others. 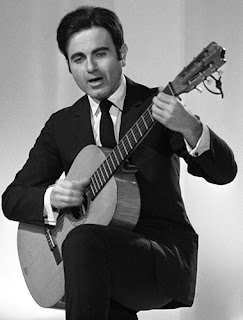 He recorded his first album in 1957, and the following year the Academy of French Records awarded him its Grand Prix. But his biggest success came with title soundtrack of François Villiers’ film L’Eau Vive (Girl and the River, 1958), a song regarded as a classic example of French chanson.

This homegrown musical genre, as personified by Edith Piaf, Charles Aznavour and Charles Trenet, took a blow with the advent of Anglo-American rock and pop, which became known as chanson yéyé and turned Johnny Hallyday into a national icon. One of Hallyday’s early records was a version of Let’s Twist Again, by Chubby Checker; the celebrated “twist” that Béart lamented nudged him, with his poetic, often melancholic songs, into the shade.

Béart, however, remained true to the music he saw as a high art form. This led to a clash with Gainsbourg in 1986 on a popular television show where Gainsbourg insisted songwriting was a “minor art”. When Béart challenged this view, the infamously outspoken Gainsbourg lewdly called him a connard.

Back to Alexandria with Georges
Posted by bataween at Sunday, September 20, 2015