Burying a Jew in Cairo with Google's help

To ensure Carmen Weinstein,  the president of the Jewish community, a dignified Jewish burial, Seth Wikas had to look up Jewish burial practices on Google. Amazing story in The Forward of how Wikas, who arrived in Cairo to work at the US embassy in 2012, became the tiny local community's religious adviser. 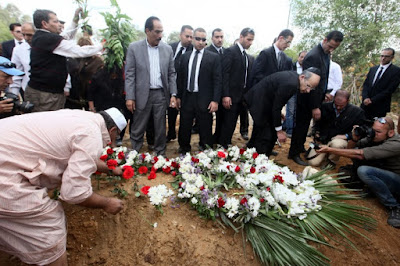 "Have you ever prepared a Jewish body for burial?” It was Saturday morning, April 13, 2013. The person on the line had called me hours earlier to let me know that Carmen Weinstein, leader of Cairo’s Jewish community, had died.

I had arrived in Cairo nearly eight months earlier to work at the U.S. Embassy, and Weinstein was one of the first people I met. She was in her early 80s, the “Iron Lady” of Cairo’s Jewish community. She had seen the community dwindle in her lifetime to less than two dozen mostly octogenarian ladies from more than 70,000. Weinstein’s mission was simple: Religious festivals would be celebrated, and people would come — from old ladies to expat Jews. I became her trusted American adviser to make sure butts were in the seats for Hanukkah, Purim and Passover. She regaled me with tales of Cairo’s religiously pluralistic pre-1948 past, when Jews, Muslims and Christians lived together relatively harmoniously.
“Seth, can you do it?”

“I’ve never done that before, Magy, but I can find out how.”

Magda Tania Haroun Silvera (known to me as Magy) had called me earlier that morning to tell me about Weinstein. Magy and her sister, Nadia, became my Jewish mothers after a chance meeting at a Hanukkah celebration, when I was surprised to learn that Egyptian Jews younger than 60 existed, and that they lived around the block from me. The sisters never hesitated to ply me with food, tea, coffee, sweets and stories of the olden days.

With that call I became Cairo’s chevra kadisha, after quickly Googling “ chevra kadisha ” and finding the Park Slope Jewish Center’s guide. Magy and Nadia picked me up, and we made our way to the Italian Hospital in the Abbasiya section of Cairo. Magy, Nadia and an orderly looked to me for direction as we stood over Weinstein’s body. I asked for the buckets of water and the sterile sheets, and gave directions regarding the washing, purification and wrapping. It was an emotionally exhausting day — not just because it was my first experience preparing a Jewish body for burial, but also because it was a changing of the guard. Weinstein was no more; Magy (the new president) and Nadia (the new vice president) were now in charge.

Magy and Nadia did a masterful job of organizing a dignified funeral and burial. To foreshadow the new character of Cairo’s Jewish community, they publicly announced that the first day of shiva would be held at the central Adly Street synagogue, Sha’ar Hashmayim.


Read article in full
Posted by bataween at Tuesday, September 29, 2015