Have you ever wondered why Tunisian Jews eat fish couscous at Rosh Hashana (New Year) - and why some Jews have names that remind them of fish? Avraham Bar-Shay (Benattia) explains (via Harissa). 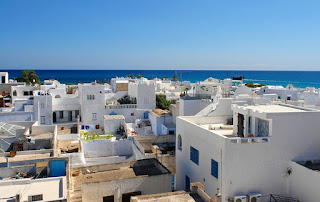 
"This is a very old story that our parents told each other, believing that we would understand nothing. I hope that those who knew it, would have forgotten it and will take a little pleasure to read it again.

During the month of Elul at that time, Jews of a coastal town in southern Tunisia were woken up very early in the morning to pray and ask for forgiveness (Slih'ot) for the sins they had committed during the year that was about to end.

The shamash (synagogue beadle) was charged with this task,  by tapping on the doors or shutters of his co-religionists. He bravely walked the dark lanes of the neighborhood, holding his oil lamp in one hand and his young son in the other.He cried in front of each door: "Slih'ot, k'oum leslih't". For those whom he knew well, he added a few extra words of encouragement.

A non-Jewish neighbor was disturbed by these calls and thought he heard the Shamash say "Sri h'out el, el k'oum Nesri h'out" (Buy fish, wake up, we'll buy fish). He quietly followed the shamash and saw that he was awakening all the Jews of the neighborhood. The next day, it was exactly the same scenario.

He went to his friend, a deep-sea fisherman, and told him the story. The neighbor, after checking for himself, assembled his colleagues and concluded that the Jews were getting up early to buy fish from strangers.They decided to get ahead of him, and carried their supplies instead to the synagogue, even before the first Jew had arrived.

Anger followed  surprise when no Jew had bought their goods. They thought their competitors were already in the synagogue yard. They waited to settle accounts with these dishonest neighbors, but they saw the Jews go out without their fish.

In those days,  fish was not sold by weight but by Shcouc (singular Shec) - "clusters" of several fish  put on a thin rope through the head. They thought they would catch the shamash and ask for explanations.

When they realized their mistake, they all laughed at their misunderstanding and decided to sell their fish at half price. And all the Jews who had gathered on the square, bought the fish. That day, all members of the community ate fish couscous.

A year later, on Yom Kippur during the Birkat Cohanim (Blessing of the High Priests), many mothers were seen in the synagogue with their young babies, all a few months old.

It is said that those who ate the Slih'ot fish of the previous year  could not sleep a wink that night.

Today we can confirm that these fish also contained Omega3,  stimulants synthesized in recent years for incorporation into blue pills.The number of babies was much larger than in other years and to counter the evil eye, they had decided that the newborns would all bear names that reminded them of fish. These names became popular and were adopted for all time.

Posted by bataween at Wednesday, September 09, 2015