Update: Steve Maman has responded to accusations against him.


Vice News is questioning whether the 'Jewish Schindler', a Moroccan-born Jew living in Montreal called Steve Maman, has indeed rescued as many Yazidis and Christians as he said he has. His partner in the rescue mission, Canon Andrew White, has poured scorn on the suggestion that Maman is dishonest or is misusing his funds. Maman himself responds on his website: (With thanks: Gina) 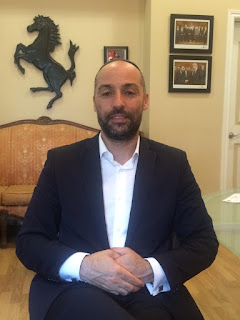 A group of Yazidi spiritual and political leaders, activists, and aid workers are demanding an inquiry into the work of a Montreal man who claims to have rescued 128 Yazidi and Christian women and children enslaved by Islamic State militants.

Steve Maman has attracted international attention for his Canadian non-profit group, The Liberation of Christian and Yazidi Children of Iraq (CYCI), which on its website claims to have "single handedly helped save over 120 Yazidi and Christian women and children from ISIS [Islamic State, or IS] controlled territories in Iraq" through a network of volunteers. Headlines affectionately dubbed the Moroccan-born Jew and luxury car and crystal dealer the "Jewish Schindler."

As of Tuesday, a GoFundMe page he set up in early July had swelled to more than $580,000 from donors around the world.

But now, concerned members of the Yazidi community in Iraq and the United States — including their top spiritual leader Baba Sheikh — have issued a written statement calling on Maman to cease taking donations until he proves that he's doing the work he says he's doing. (...)

Maman, on the other hand, argued that his group "actually were able to prove (...), with pictures, fingerprints and documents that the people that we have liberated were documented like no other liberators on the ground ... The only one that is able to show credibility so far is me."

Maman said Dawood (an assistant)  brought only 15 names because that is all they felt comfortable disclosing. "We didn't want to divulge anything else other than that. The reason behind it is simple: we knew that if we showed the other 113 names that are missing, these people were going to go running to them to…pay, to take photo-ops and take away those liberations from us."

Maman showed VICE News images of Dawood with the rescued girls and children, followed by photos of the Iraqi man with the Maman family. These, he says, prove that his organization is legitimate.

But when asked to provide proof of the 128 rescued people, Maman showed around 20 photos of the men, women, and children. A handful of these were members of Dawood's family, according to Maman, who showed VICE News an email he'd received, containing photocopies of the relatives' official documents and passports.

Maman explained that he trusts only one member of the Yazidi community. "It's the representative of the Yazidi prince in the world. He's in Baghdad at the head office of the prince. You know there was a king, a Yazidi king, did you know that?" he asked.

Maman said in a second phone call on Tuesday that he would be conducting a rescue mission in the Kurdistan region on Wednesday and that two journalists would be present to witness it. "There's going to be one very prominent United States journalist ... somebody on the ground representing Glenn Beck ... his name is Matt ..." said Maman, who couldn't recall Matt's last name. "He's already met with our team and all that, and he's going on a liberation, he's going to videotape."

"We're basically going to have a lot of people there, so we're going to end the rumors on the ground and we're going to show people how we do it compared to others," he added. (...)


The Reverend Canon Andrew White, who is affiliated with Maman's group, brushed off any concerns that the group isn't above board. In a phone interview with VICE News on Tuesday, he said the group has "evidence of everybody."
"I couldn't care less what they say. They're not on the ground doing it. Of course people will say this. They say this all the time. And I'm not going to argue. Now people are being killed doing it. We're not in here just to mess around with journalists," he said before hanging up the phone.

Jewish 'Schindler' has nothing to hide'

Moroccan-Jewish saviour for Yazidis and Christians
Posted by bataween at Friday, August 28, 2015