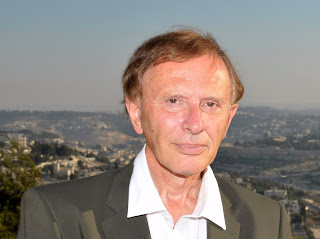 The great historian Robert Wistrich died in May 2015. This wide-ranging article was published posthumously in the Israel Journal of Foreign Affairs. Wistrich's masterly analysis of the Anti-Zionist mythology touches on the way that the ethnic cleansing of Jews from the Middle East and North Africa has been suppressed and distorted, so as to spread the myth that Israel is an 'alien' colonialist body in the region. (With thanks:Lily)

"At the core of the anti-Zionist world-view espoused by Islamists, leftists, and many misguided Western liberals is a seriously distorted perception of Israel as the last Western colonialist project. Among the more glaring blind spots is the willful refusal to face the reality of the “ethnic cleansing” of Jews from Arab lands in the Middle East after 1945. At the end of World War II, there were almost a million Jews in Muslim countries, many of them concentrated in North Africa. 25 As a result of Arab persecution, pogroms, and harassment, a majority of these Middle Eastern Jews were driven from their homes and sought refuge in the newly created State of Israel. There, they were finally able to enjoy full political rights and the prospect of socioeconomic mobility for the first time as a collective. For many centuries, the so-called “Oriental” Jews from Morocco, Tunisia, Libya, Egypt, Yemen, Syria, Lebanon, Iraq, and Iran had been deeply rooted in the Middle East, where Jewish settlements had long predated the advent of Arab invaders from the desert. Exactly the same was true of the Land of Israel.

This fact, too, has been deliberately suppressed or marginalized by left-wing and pro-Palestinian ideologues who continuously stigmatize Zionism as a Western pro-imperialist movement. It enables Palestinians and their allies to perversely misrepresent Israel as an “alien body” in the Middle East—a claim that itself reeks of antisemitism.

At the same time, the Western left remains stunningly indifferent to the endemic intolerance of Sunni Muslim Arab majorities, not only to Jews but also toward Middle Eastern Christians, Shi'a Muslims, Kurds, Yazidis, Bahais, and other minorities. Indeed, the “Christian” West as a whole has little interest, it would appear, in the genocide perpetrated before our eyes by Islamists against the most ancient Christian communities of Iraq, Syria, and the Levant. The barbaric atrocities of ISIL (Islamic State) in crucifying, beheading, and executing “infidels” (including fellow Muslims) is by no means exceptional in the bloodstained history of Islam. Yet it arouses minimal indignation or protest in comparison with the imaginary “crimes of Israel.”

Read article in full
Posted by bataween at Wednesday, August 12, 2015

off topic//
Syrian Jewish woman on Israeli delegation to the UN discusses antisemitism in Syria as she was growing up, among other things. She is the 2nd speaker.

I have just scanned the opening pages of Wistrich's book. It is a must read. I will soon download the PDF. Thanks for the tip.

Wistrich is a scholar of great intellect. His premature death was sad and certainly left a huge hole to the Antisemitism studies community. His book "Lethal Obsession" (2010) is a must read. I still have to read his latest "from ambivalence to betrayal" which I presume the current brillant article was inspired from.

This will certainly push me to read it now as soon as possible, before the second installment of Simon Schama's "The Story of the Jews" due in November. I have been waiting for this second book with eargerness. Of course, Schama is a historian in the same way as Wistrich, but the latter is an expert in the studies of anti-semitism.