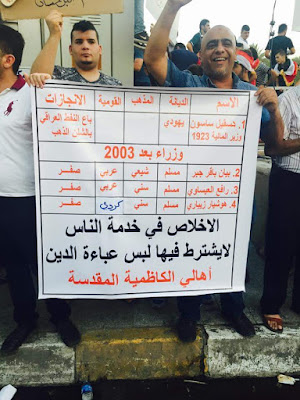 With thanks: Janet and Lisette

(Updated): Spotted at a demonstration today in Baghdad,  a placard ranking Iraq's finance ministers; three have served since the fall of Saddam Hussein in 2003.

Well, what do you know.

In top place for loyalty and honesty comes Sir Sasson Heskell, who was Finance Minister five times since 1923.

Then are listed the names of three ministers of finance since  2003:

This is a rare public acknowledgement of the essential role Sir Sasson Heskell played in shaping modern Iraq.

Since the fall of Saddam Hussein and the advent of 'democracy', Iraqis are nostalgic for the contribution their Jews made to the country - and are not afraid to show it.

Sir Sasson Heskell (born 17 March 1860 – died 31 August 1932) was an Iraqi statesman and financier. Also known as Sasson Effendi ( from the Turkish Effendi, a title meaning Lord). Regarded in Iraq as the Father of Parliament, Sir Sasson was the first Minister of Finance in the Kingdom and a permanent   member of Parliament until his death. Along with Gertrude Bell and T.E.Lawrence (Lawrence of Arabia), he founded the nascent Iraqi government’s laws and financial structure. It was he who tied Iraq's crude oil revenues to the Gold Standard.
He was knighted by King George V in 1923. King Faisal conferred on him the Civil Rafidain Medal and he won the highest medals from the Shahinshah of Iran and the Sultan of the Ottoman Empire. He also received a number of posthumous decorations among which was one from Saddam Hussain of Iraq!

Sir Sasson is a scion of an ancient and distinguished Jewish family in Baghdad - the Shlomo Davids. His father Hakham Heskel Ezra Shlomo David travelled to India in 1873 to become the Chief Rabbi of the thriving Baghdadi community there. In 1885 he returned to Baghdad as the leading rabbinical authority and a great philanthropist. He built the  Hakham Heskell Synagogue which was considered one of the most prominent synagogues in the city.

Sasson Eskell and the House of Dreams