Mizrahi pop means you're having a good time

They're remarkably free of cynicism, patriotic, romantic, and above all, they're happy, happy, happy. Israel's mainstream Israeli pop kings and queens are flaunting their Mizrahi roots: Israel is a Middle Eastern minority having a good time. Read Matti Friedman's latest piece in The Tablet:

Sarit Haddad, queen of the Mizrahi scene for the past decade and a half, teamed up in a new video with the producers of Arisa, a line of gay Mizrahi parties named for a spicy Tunisian spread. This is the same crew behind the “Tel Aviv” video, and also the one for “This Isn’t Europe,” which gets my vote for the best Israeli clip in recent memory in any genre. Sung by Margalit San’ani, one of Mizrahi music’s elder stateswomen, this song is a patriotic ode of sorts making fun of Israeli (and, one suspects, Ashkenazi) hipsters’ trendy and pathetic love for places like Berlin. “You’re not from London or Amsterdam/ Your face, honey, is from Bat Yam,” she sings, naming one of Tel Aviv’s sweatier suburbs. The clip, which stars a guy flouncing around dirty streets in a ball gown, is a national document as poignant as “Hatikvah.” I can’t watch it without wondering what Herzl would think. 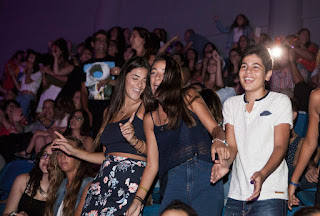 The neighbourhood may be going to pot, but Israeli youth are having a good time

As that song indicates, a kind of unapologetic national loyalty is present in Mizrahi music as it no longer is in most other Israeli songs, which these days tend to opt for angst, sarcasm, or attempts to pretend we’re all somewhere else. More and more Israeli artists sing in English. But rootlessness is not going to yield much worth listening to, and Israeli audiences know it. Mizrahi music doesn’t pretend to be from anywhere but right here in Bat Yam, honey. It’s not just Israeli music, in other words, but the most Israeli music there is. Many aspects of Israel’s politics and cultural life, like the film industry, are warped by international interest and money and tailored to foreign specifications. Mizrahi music is immune, and everything about it is local. In a new dance number by Eden Ben-Zaken we get the following patriotic expression, apropos of nothing in particular:


The whole city’s up on the roof, on the tables
Everyone’s clapping, raise your glasses!
Welcome to Israel
Can you tell the difference?
You’ve reached paradise, say, “Thank God!”

The same attitude is applied to Judaism. The nature of the current Mizrahi scene in this regard, and in general, can best be summed up with the following scraps from the Moshe Peretz/Omer Adam concert I went to in August:
• Songs about heartbreak performed with pathos, inspiring deep emotional involvement on the part of teenage girls near me, and only slightly less on the part of their mothers, who were next to them.

• A song about partying with the guys at a cheap weekend destination popular with Israelis—Bucharest. This is probably the only party song ever written about Bucharest, at least in a language that is not Romanian.

• Adam brings out a bottle of mineral water. Peretz puts his hand over Adam’s head in lieu of a kippah, and Adam recites the Hebrew blessing said before drinking water. About 8,000 people: “Amen!” The concert continues.

• A rendition of “Tel Aviv,” camels, gay pride, and all. Dancers strut with peacock feathers. Rainbow stripes flash on screens. Ya habibi!

• Adam sings “I Thank You,” based on the prayer recited by traditional Jews every morning upon rising. His movements—arms outstretched, turning from side to side—evoke a particularly devout worshipper in synagogue.

Or these, from the Facebook page of the young singer Haim Ifargan:
• Selfie in car with aviator glasses.
• Photo in pool with friends.
• Cellphone video of fans.
• Soulful selfie with kippah before the fast day of Tisha Be’av: “Have a meaningful fast [thumbs-up emoji]”
• Clip from a morning TV program in which Ifargan does a slow cover of the Arabic love song “Tamali Ma’ak,” made popular by Amr Diab of Egypt.

***
Zionism traditionally existed in tension with Judaism and the Middle East, and there are still quite a few Israelis who don’t think much of either. Mizrahi music embraces both. If you see Israel as a country of people who happen to be Jewish and are victims of an unfortunate accident that dumped them in the Middle East, this music and its success might grate. But if you accept Israel for what it is—a Middle Eastern Jewish country—it all makes sense.

Welding torches hiss in the rocket workshops of Gaza; centrifuges beep and whir under Persian mountains; farmers on our borders hear the tap-tap-tap of tunneling beneath their fields; up the road the crump of barrel bombs announces that the world that once expelled Mizrahi Jews is now destroying itself; from the radio comes the deep-toned blather of Israeli leaders adept only at confrontation; the odds against a normal future grow longer and longer—and here is a world of innocent love, of dancers on tables and lirdim on the town, a place near the sea where Arabic and Hebrew mix, where Judaism is everything and no big deal and God just another part of life, like sunshine and cigarettes. When you hear Mizrahi pop you’re hearing a minority in the Middle East having a good time. It’s a beautiful sound.