In an interview with the Kuwaiti daily Al-Rai that was published July 5, 2015, (via MEMRI) Sunni Iraqi MP and leader of the Ummah Party Mithal Al-Alusi once again called for peacebetween Iraq and Israel.The politician, who has visited Israel several times, lost two sons in a terror attack. (With thanks: Lily)

He said that the Arabs and Muslims are responsible for the emergence of the Islamic State (ISIS). Arguing that ISIS the organization is an Arab and Muslim creation because it was they who allowed extremist views, a vengeance mentality, and nullification of the other, he called for combating this approach, and for uniting the Arab and Muslim ranks in the struggle against ISIS.

The newspaper asked Al-Alusi, who has visited Israel several times, about his position vis-à-vis the country, and he replied that he supports peace with Israel and longs for an Iraqi Embassy in Israel with an Iraqi flag flying atop it. He also called Iran an "insane actor" that is gambling with the lives of the Iranian people in its attempts to take over the region. 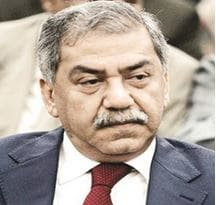 Read extracts from the interview

Iraqi Jews are a bridge to peace