Iran: Holocaust denial contains an appeal to repeat it

Holocaust denial  is one of the the three key sides of an ideological triangle, together with elimination of Israel and demonisation of Jews, espoused by the Iranian regime. in this important interview by Karmel Melamed of the Jewish Journal, German academic Matthias Kuntzel says that current Iranian antisemitism has undoubted parallels with Nazism. 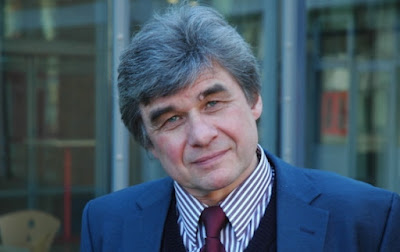 
Karmel Melamed: Can you please explain why the current Iranian regime for nearly 20 years has had such a massive public and overt obsession with the subject of Holocaust denial? Why do they keep bringing up this topic as a part of their foreign policy?

How can you wish to get rid of Israel and at the same time acknowledge the truth of the Holocaust? That is impossible. Anyone who accepts the reality of the Holocaust can’t at the same time believe that the Jews are the rulers of the world and that Israel of all countries is the root of all evil. These three items: elimination of Israel, demonization of Jews and Holocaust denial – are interwoven and belong together. They form what I call an ideological triangle. If any of the three sides of this ideological triangle is absent, the whole structure collapses.
Holocaust denial is at the same time antisemitism at its peak. Whoever declares Auschwitz to be a “myth” implicitly portrays the Jews as the enemy of humankind, who for filthy lucre has been duping the rest of humanity for the past seventy years. Whoever talks of the “so-called” Holocaust suggests that over ninety percent of the world’s media and university professorships are controlled by Jews and thereby cut off from the “real” truth. In this way, precisely the same sort of genocidal hatred gets incited that helped prepare the way for the Shoah. Every denial of the Holocaust thus tacitly contains an appeal to repeat it. And that is what the Iranian leadership does.


From the former Iranian president Ahmadinejad, to Iran’s Supreme Leader Khamenei and others in the Iranian regime, they unapologetically deny the Holocaust, embrace Holocaust deniers, sponsor Holocaust denial conferences and Holocaust denial cartoons which have caused an uproar in the West. Do you think they do not care about the negative public relations image this creates? Or is there another motivation?

They care about their negative image. That is why the tone of Holocaust denial has changed since President Rohani and Foreign Minister Zarif entered office. Previously, denial of the Holocaust was the leitmotif of Iran’s foreign policy. Today it is still an undisputed part of Iran’s state ideology, but is no longer the centerpiece of its public diplomacy.
However, even the internationally presentable Rohani is still far from acknowledging the Holocaust. Asked, for example, whether the Holocaust was real, Iran’s new president responded: “I am not a historian. I’m a politician.” To pretend that the facts of the Holocaust are a matter of serious historical dispute and available only for historians is a classic rhetorical evasion.
Later Rohani maintained that “a group of Jewish people” had been killed by the Nazis during WW II. But again: Holocaust deniers commonly acknowledge that Jews were killed while insisting that the number of Jewish victims was relatively small and that a systematic effort to wipe them out did not place.


In your new book, you discuss the role Radio Berlin broadcasted into Iran played and the works of Nazi academics played in exporting their form of anti-Semitism to Iran during World War II. Can you please shed light into why this is important for us to understand today regarding the current Iranian regime’s hatred for Jews?

In defending the nuclear deal with Tehran, President Barak Obama and Secretary of State John Kerry gave the impression that they view the regime’s anti-Semitism as an incidental problem; to take it seriously would be a waste of time. Others believe that Iranian anti-Semitism is merely a response to Israel’s policies. I show in my book, that both assumptions are wrong.
On the one hand, there was in the Shiite tradition always a strong anti-Jewish tendency. And there is, on other hand, still the after-effect of Nazi propaganda: Between 1939 and 1945 the Nazi’s anti-Semitism was exported via a daily Persian-language broadcast from Berlin to Iran. This broadcast was popular and its main radio speaker, Bahram Sharokh, a celebrity during those years.
The Nazis based their antisemitic incitement in Persian language on Islamic roots. They radicalized some anti-Jewish verses of the Koran and combined them with the European phantasm of a Jewish world conspiracy. Ruhollah Khomeini was, according to Amir Taheri, a regular and ardend listener of “Radio Berlin”. His claim of 1971 that “the Jews want to create a Jewish world state” mirrored a classical trope of Nazi antisemitism.


For more than 30 years the Iranian “propaganda ministry” has repeatedly marched out Iran’s sole Jewish members of Parliament and individual Jewish leaders in front of Western media outlets to claim the Iranian regime “loves Jews and treats Jews equally”. As Jews who fled this regime in Iran, my community in America knows these claims are false and the Iranian regime has no love for Jews. I believe the Iranian regime has taken a direct page out of Josef Goebbels propaganda play book in trying to spin a false media image of Jews being treated nicely to cover their true evil. What is your assessment of this phenomenon?

It is true that the Iranian regime distinguishes between Zionism as a menace and Judaism as a legitimate religion and at holiday time, wishing all Jews, especially Iranian Jews, a blessed Rosh Hashana. However, a “Jew” is here characterized as someone who is willing to support Tehran’s antisemitic program and Israel’s elimination. Only this kind of Jew – the fanatical followers of the Neturei Karta sect, the intimidated leaders and members of the Iranian Jewish community, or the useful idiots of the Jewish radical left – are acceptable to Tehran. All other Jews are fair game.

The killing of five Jewish tourists in Bulgaria in 2012 and the attacks or planned attacks in Thailand, Georgia, and India perpetrated by Hezbollah terrorists and Iranian agents made headlines. Other Iranian attempts to kill Jews in Kenya, Nigeria and Bangkok are less well known.

The 1994 suicide bombing of the Jewish AMIA-Center in Buenos Aires caused the death of 85 persons and injured more than 150. This was the most deadly terror attack against Jews since World War II and it was the Iranian leadership including Khamenei and Rafsanjani that made this decision and instructed Hezbollah to commit the crime. The sole reason was the fact that Argentina did not want to continue its nuclear co-operation with Iran. Who, however, should be blamed and punished for Argentina’s independent decision? The AMIA example clearly shows that Iran’s anti-Jewish paranoid pattern contains a call to kill.


The Iranian regime and its leadership, spews hatred against Israel and “the Zionists” instead of using the word “Jews”. The regime’s leaders claim they have no “ill will” against the Jews but only hate for Israel. Is their hatred really against just Israel, or is this just a cover-up for a deeper rooted anti-Semitism?

You’re right. Though the regimes distributes thousands of antisemitic brochures such as the “Protocols of the Elders of Zion” it rarely mobilizes openly against “Jews” but agitates against the “Zionists”. It is important, however, to understand that this regime invests the word “Zionist” with exactly the same sense as that with which Hitler once invested the word “Jew”: namely that of being the incarnation of all evil. Destroying Israel is in their understanding the only way to stop that evil. Or in Ahmadinejad’s words: “The Zionist regime will be wiped out, and humanity will be liberated.”

This sentiment—liberation through destruction—is the one for which the Holocaust historian Saul Friedlaender coined the term “redemptive antisemitism”. It is not so far from that expressed in a Nazi directive of 1943: “This war will end with antisemitic world revolution and with the extermination of Jewry throughout the world, both of which are the precondition for an enduring peace.”

The regime’s hatred of Jews resembles Hitler’s ideology in this aspect: Both have a utopian element. Just as Hitler’s “German peace” required the extermination of the Jews, so the Iranian leadership’s “Islamic peace” depends on the elimination of Israel. It is high time that the White House recognizes this utopian element and takes it seriously.