A documentary series, a companion to the Encyclopedia on Jewish Muslim relations, promotes an idealised view of Arab-Jewish relations. In June the Woolf Institute in Cambridge, which encourages interfaith dialogue, screened this work by the French-Mauritanian director Karim Miske. See my comment below. 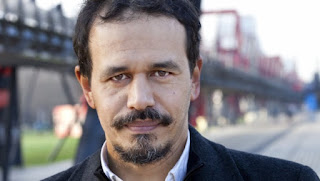 "When I was entrusted with the task of directing this ambitious documentary series, I first felt a weight fall on my shoulders. How was I to find a way of telling such a trapped story that would be both fair and balanced, when those ‘identity snipers’ from both camps would like nothing more than to ambush me? I decided that it was up to me to place myself within this millennial history to find out from which perspective to approach it. Half of my ancestors are Muslims, I myself have no religion and what’s more, I have always refused to associate myself to a given identity. Nevertheless, my heritage was bound to affect my perspective. I had to somehow approach the subject from the inside; to become both Jewish and Muslim, to use historical empathy to the greatest of my capacity in order to win over the spectator to this bizarre family saga in which ones origins are lost in the mists of an Abrahamic myth. This empathy was synonymous with a good dose of irritation if not outright anger: for the Medieval injustices relating to the Dhimma status in conversation over the centuries, with those, more recent, suffered by the Palestinians. But my anger was greater still towards the contemporary ideologies that erect mental prisons around those, both Jewish and Muslim, who can no longer see the Other as anything but an adversary; thus re-painting these last 1400 years in the most sombre of colours.

For my journey, Hannah Arendt became my provider and talisman, since the thorniest part of this history is situated in the 19th and 20th centuries. Arendt has, to my mind, elaborated a concept that could be applied perfectly to both Zionism and Arab Nationalism and to their contemporaneous religious corollary: tribal nationalism. Consequently, in the film, I treated these two ideologies like two faces of the same coin*, explaining how they both work towards the constitution of politics from 'identity, methodically destroying the millennial bond that unites Jews, Christians and Muslims of the Near East. Such is the tragic story of our age. It is the history of Irish Catholics and Protestants, Indians and Pakistanis, Hutus and Tutsis. The list, alas, could be extended out further. To tell this story, for me, was to show that which was necessary to distend and then to destroy, as much as it was possible, this ancient bond. To make the Jew as much as the Muslim believe that he, who was yesterday a brother (and brothers face one another often, but always remain attached), has today become not just an enemy, but a stranger.

My comment: while presenting his credentials  as an 'objective' observer, the central theme of Miske's film 'Intimate strangers' is that outside forces destroyed the brotherly bond between Jews and Muslims. These forces are Zionism and Arab nationalism, which Miske labels 'tribal nationalism' , adopting Hannah Arendt's terminology.

The central flaw in Miske's presentation is the whitewashing of Muslim antisemitism. Thus, the injustices of Jewish 'dhimmitude' are brushed aside in one sentence, and rendered equivalent to the 'more recent injustices' suffered by the Palestinians. In other words, they cancel each other out. There is no hint that another outside force, European colonialism, was instrumental in abolishing the dhimmi status.

The film even attempts to blame events such as the 1934 pogrom of Constantine, Algeria on the French.  It argues that the Decret Cremieux drove a wedge between Jews and Arabs by conferring on the Jews French citizenship. But when I argued that French citizenship was also offered to Muslims, I was told that they were deterred by bureaucratic hoops from applying for it.

By reducing both Zionism and Arab nationalism to a tribal nationalism which breeds intolerance of the Other, Miske fails to distinguish between the democracy  that is Israel and the Arab autocracies which have marginalised and expelled their minorities.

After oppressing/humiliating/exploiting Jews for more than 1000 years as dhimmis, the Arab-Muslim world has no right to reproach the Jews for taking French citizenship or anything else.