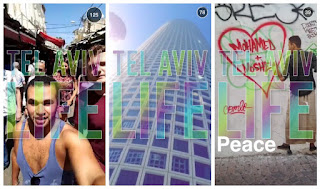 This article in +972 Magazine peddles the revisionist narrative that Arabs were displaced and dispossessed from Jaffa, and Jewish Tel Aviv swallowed what was left. In fact, Jaffa was never exclusively Arab, and Jews were the first to be driven out of the port by Arab riots. This comment by 'Bar' sets the record straight:

Tel Aviv is a vibrant, amazing modern city. It was built over sand dunes and purchased property initially, even if it eventually grew beyond into areas where Arabs had lived.
However, the story of Tel Aviv is different than the authors’ tale. It is a story of a vibrant, new community built by people seeking to establish a home for themselves. They built a modern town on dunes, using their own resources and nobody else’s. They then had to fight wars to protect their homes – wars started by the Arabs and intended to drive away the Jews. These wars of ethnic cleansing which the Arabs launched – and by Arabs I’m referring to local and regional groups and states – demonstrated with finality to the Jewish Yishuv and then to Israel that it must take on a defensive posture, protect the areas it conquered in the war and limit the number of Arabs in its midst lest it find itself in yet another war. The Israelis had reason to be afraid: they lost over 1% of their population in the war, many times that became casualties and, the Arabs continued to threaten them and Jews all across the Middle East.
This last part is critical because Jews across the Middle East found themselves having to flee their homes and communities. Most found refuge in Israel and re-established their lives there. One of the cities that benefited from this influx was Tel Aviv. Like all of Israel, this city has a high percentage of refugees and their descendants from Arab lands. These are people who have built new homes because their old homes are gone forever – and gone forever because of the violence Arabs launched against Jews, not the other way around. (My emphasis)
Today, Tel Aviv is bustling and a major city because Israelis built up this country out of a need to establish a safe refuge for Jews in what is obviously a very hostile Middle East. And let’s not kid ourselves, we can all see clearly what would have happened in 1948 in the fate of other minorities in the Middle East. Ask the Kurds, Yazidis, Copts, Baha’i, Druze, non-Coptic Christians and even Shia in Sunni majority areas and vice versa whether it’s better to have a strong state to protect a minority from those who will attack it. Their answer would be unequivocally yes. The Jewish people did this and did it well enough that Tel Aviv is one of the world’s greatest cities. Those who would seek to color this achievement through the lens of political fate of those who launched this war would do much better to push for full integration of Arab refugees into the countries where they’ve been living for some decades. They can build their own beautiful and vibrant cities.
Posted by bataween at Friday, August 07, 2015

I don't intend to read the 972 piece but I can answer the charge that Jews drove Arabs out of Jaffa/Yafo. In December 1947 within days of the UN general assembly recommendation of partition of the country into an Arab state and a Jewish state, Arab irregular forces in Yafo started shooting into Tel Aviv from the minaret of the Al-Manshiyyah mosque [also Manshieh] presumably in the Manshiyyah section of Yafo along the sea. This especially affected Jews in south Tel Aviv, including Kerem haTeymanim, etc. Jews were killed and Jews in south Tel Aviv and adjacent Jewish parts of Yafo [yes, there still were Jewish neighborhoods of Yafo] began to flee their homes and were given shelter in the entrances and stair cases of Jewish apartment buildings in more central and northern parts of TA. By the way, bullets sometimes reached central TA and killed Jews there too.

In April, five months after Arab shooting into TA had begun, the Irgun/Etsel began a counter-offensive to stop the Arab shooting, which did not stop. The Irgun forces advanced into Yafo, into Manshiyyah, building by building.

Now, according to the partition recommendation, as I understand it, Yafo was supposed to be part of the Arab state, although surrounded by Jewish towns and cities [TA, Bat Yam, etc.]. When the British sensed that the Jews were winning the battle they sent their own forces into battle to stop the Irgun's advance. The Brit forces included tanks and fighter aircraft. The British too were stymied, although this is not the place for details on that matter.

Now, we have testimony from non-Jewish observers that the Arabs of Yafo were fleeing from the fighting, after the Irgun's counter-offensive had begun, before the Irgun forces got very far into the city.
1st - Herbert Pritzke, Bedouin Doctor -- Pritzke was a German mercenary hired by the Mufti's forces and was stationed in Yafo/Jaffa at one point. He says that Arabs began to flee while the Irgun was attacking but before the Irgun had much advanced into the city. That is, they were fleeing while Arab forces were still in the city.
https://books.google.co.il/books/about/Bedouin_Doctor.html?id=8V8-AAAAIAAJ&hl=iw

2-- John Roy Carlson, Cairo to Damascus -- Carlson [penname for Avedis Derounian] saw the 1947-1949 war mostly from the Arab side. He shows the falsehood of Arab reports and claims about the war.

3-- Kenneth W Bilby, New Star in the Near East -- Bilby debunks the Arab claim made shortly after the battle about a massacre of Arabs in Manshiyyah [Manshieh in the book, as I recall]
http://www.amazon.com/star-Near-East-Kenneth-Bilby/dp/B0007E3GU0

Well, I weakened and did look over the article on 972. I found this sentence quoted below that is a lie, in fact a stupid lie showing gross ignorance. As to the circumstances of the flight of most of the Arab inhabitants from Yafo, I have explained that in my comment above. The Arabs were not "forced to flee." The new lie that I have found in the same sentence is one that I did not expect since it reflects gross ignorance of the events of the year 1948, particularly the events in and around Yafo. The Arabs of Yafo were fleeing before Israel declared independence on 15 May 1948. Hence, upon "the establishment of the State of Israel in 1948" most of the Arabs had already fled.

"After the establishment of the State of Israel in 1948, Jaffa’s city center was left in ruins and most of its Arab inhabitants were forced to flee." -- quoth Shimrit Lee on 972

My conclusion is that 972 and its affiliated organizations and groups exist to lie about Israel with the purpose of smearing it. Defaming it. Likewise, 972's suppliers of funds [EU bodies, etc] supply its funds for the same purpose, because it smears Israel with gross and ignorant lies.

It is also surprising, but not entirely, that a university student [one Shimrit Lee] supposedly doing research on the relevant topic wrote such lies. Of course, 972 should get not get any benefit of the doubt as to not intending to publish lies. Publishing such errors of fact indicates ignorance and a casual attitude toward historical truth whereas they pretend to act to correct falsifications of history.

Thanks for your vey comprehensive account of the events of 1948, Eliyahu.

You're welcome, Bataween.
Coincidentally, Haaretz just published a review by Prof Shlomo Avineri of a new book on the Arab conduct in the 1947-1949 war in the two cities of Jaffa/Yafo and Jerusalem. Here is a quote:

"As occurred elsewhere in the country, the downward spiral into violence in Jaffa was precipitated by the general strike declared by the AHC on December 2, 1947, to protest the partition resolution. Disturbances broke out in the mixed, Arab-Jewish neighborhoods along the boundary line between Jaffa and Tel Aviv. Jews were wounded and murdered; the flight of Jewish inhabitants began. In return, the pre-state Jewish underground organizations – Haganah, Irgun and Lehi – launched reprisal raids, sparking the departure of local Arab residents."
http://www.haaretz.com/misc/article-print-page/.premium-1.669862

Avineri's account, presumably based on the book as well as his own experience of the times, is not quite accurate, in my view. It is misleading in that the Arab attacks began in December 1947, whereas the Irgun counter-attack which led to Arab flight did not take place until April 1948, nearly five months later. Many many or most Jews in South TA & adjacent areas had already fled. I also find his use of the phrase "Disturbances broke out" to be misleading too. In that period of the beginning of "civil war" in the country [to use Benny Morris' term] the Arabs were initiating attacks on Jews. The Arab Higher Committee [AHC] had planned this as Avineri indicates in the first sentence of the quoted paragraph.