The setback suffered by president Erdogan's AKP party in the Turkish elections may not be enough to reverse an unstoppable trend - the exodus of young Jews, who leave for higher education and don't come back. This Times of Israel article appeared before the results of the elections were known. 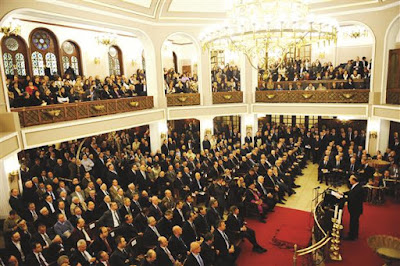 Despite a rich history under the Ottomans — rising to prominence as ministers, traders and buccaneers — and active involvement in public life in the early Turkish Republic, Turkish Jews no longer contribute significantly to the country’s political or cultural life. In 1948 Turkey was home to about 80,000 Jews; three years later nearly 40% had left. Talking with members of the community today, one is likely to hear the future for Jews in Turkey described as “bleak”.

The departure of Jewish youth is by no means an exodus. The numbers are small, but so is the community from which they’re leaving. Officially, 17,300 Jews live in Turkey today, the vast majority in Istanbul, making it the largest Jewish community in the Muslim world. A decade earlier, it was closer to 20,000.
This much is clear: class sizes in Jewish kindergartens are shrinking, the birth rate is dropping and the community is aging.

Hard statistics concerning the emigration of young Jews, however, are difficult to come by. The official figure, for example, doesn’t account for the rising number of high school graduates who have left for opportunities abroad.

Mois Gabay, a columnist for the Jewish Şalom newspaper, wrote last year about the growing trend of young Turkish Jews moving abroad. He told Deutsche Welle in January that “40 percent of Jewish graduates chose to seek higher education abroad” in 2014. In 2013 it was half that figure. He said that number was expected to rise.

Faced with anti-Semitic rhetoric that’s been given free rein by the government in recent years and amplified by social media, some young Jews have also opted to move to Israel for ideological reasons.

Immigration to Israel by Turkish Jews has remained steady at roughly 100 per year since 1980. In the past decade, 1,002 Turkish Jews have immigrated to Israel, according to statistics published by Israel’s Immigration and Absorption Ministry.

Like many Turkish Jews, Maden has family living in Israel, and “the idea of leaving and coming to Israel was always there.” In 2009, he immigrated to the country whose name he carries.

Maden’s experience compared to that of Lisya Malki, a 31-year-old mother of one who moved to Israel in 2008 and now lives in a small town north of Tel Aviv.

“Even though I grew up there, we had our own holidays, our own culture,” she said in Hebrew tinged with a slight Turkish accent. “I was a Jew living in Turkey, that’s what I always felt.

Read article in full
Posted by bataween at Tuesday, June 09, 2015

It looks like the AKP will steal the election since they announced an enormous number of overseas voters who seemingly went with the AKP. But if the results actually go poorly for the AKP then there will almost certainly be a pogrom in Turkey.

I'm not sure which is more interesting, the article about the newspaper from the Ladino Wikipedia, or the Ladino newspaper.