Why did it take 74 years to mark Farhud Day?

Writing in a number of news media, Edwin Black asks why it took so long to establish International Farhud Day, marked for the first time this year on the anniversary of the bloody pogrom in Iraq. The crushing weight of the Holocaust, the minimisation or ignorance of the role of the Mufti of Jerusalem, and the scepticism of the politicising media all contributed to the marginalisation of the Iraqi-Jewish Kristallnacht : 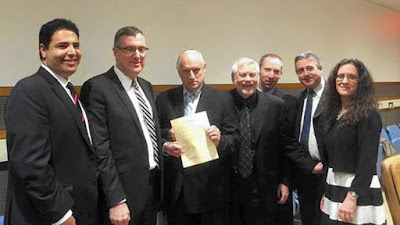 First, persecution of Jewish victims in Arab countries did not conform to the established line of study that followed the classic Holocaust definition, as archetypically expressed by the USHMM’s mission statement: “The Holocaust was the state-sponsored, systematic persecution and annihilation of European Jewry by Nazi Germany and its collaborators between 1933 and 1945.” Note the pivotal word “European.” This geographic qualifier left out the Jews of Iraq as well as their persecuted coreligionists in North Africa, where some 17 concentration camps were established by Vichy-allied and Nazi influenced Arab regimes.

Second, because the persecution of Jews in Arab lands during WWII and their forced exodus was considered beyond the thematic horizon, the type of well-financed and skilled scholarship that has riveted world attention on the Holocaust in Europe, generally by-passed the Sephardic experience. Certainly, the overwhelming blood and eternal sorrow of the Holocaust genocide was experienced by European Jewry. But their deeply tragic suffering, including that endured by my Polish parents, who survived, does not exclude the examination of other groups. Years of focus on the plight of Gypsies, Jews in Japan, and other persecuted groups proves that. Undeniably, a solid nexus clasps the events of the Middle East, roiling in oil, colonialism, and League of Nations Mandates, to a European theatre brimming with war crimes and military campaigns.

After the 1941 Farhud and during the subsequent years Husseini was on Hitler’s payroll, the Mufti of Jerusalem toured European concentration camps and intervened at the highest levels to send European children to death camps in occupied Poland rather than see them rescued them into Mandate Palestine. In his diary, Husseini called Adolf Eichmann “a rare diamond.” What’s more, the tens of thousands of Nazified Arabs who fought in three Waffen SS Divisions in the Balkans and across all of Europe, were fighting for a Palestine and a greater Middle East Arab cause that hinged on Jewish extermination and colonial upheaval. When I wrote The Farhud in 2010, the focus was on excavating the details of a forgotten pogrom and a forgotten Nazi alliance. Only in recent years has a renewed trickle of excellent scholarship yielded gripping new research into the Arab role in the Holocaust. For example, there is Islam and Nazi Germany’s War, which The Wall Street Journal reviewed as “impeccably researched.” A second book, Nazis, Islamists, and the Making of the Modern Middle East, by (Barry Rubin and... - ed) meticulous Arab and Turkish culture researcher Wolfgang Schwanitz, was published by Yale University Press. There are several excellent others.

Third, critics say, that many of the leading Jewish newspapers and wire services, now vastly more politicized than they were in the prior decade, did not devote sufficient space and informed knowledge to the topic. Moreover, some these critics suggest that in recent years, the Jewish press seemed to have marginalized the atrocity and its aftermath as a political discussion. “When former Deputy Foreign Minister Danny Ayalon was doing his 2012 campaign for Jewish refugees from Arab lands,” asserts Lyn Julius of the British organization HARIF – Association of Jews from North Africa and the Middle East, “hardly a day went by when certain Jewish or Israeli newspapers did not politicize the matter, or suggest Israel was exploiting the issue for political gain.”

But on June 1, 2015, yes, 74 inexcusably years late and, yes, not an hour too soon, after waiting for thirty minutes beneath a gaggle of umbrellas in the torrential rain at a narrow admittance gate on First Ave, and then into a packed hall at the UN, attended by diplomats from several countries, human rights activists of various causes and key Jewish leaders from a communal spectrum, in an event broadcast worldwide live by the UN itself, the stalwarts of Farhud memory gathered to finally make the proclamation of International Farhud Day — and made it loud and clear. In doing so, they made history by simply recognizing history.

Read article in full
Posted by bataween at Saturday, June 27, 2015

I meant to enter a comment here a few weeks ago about an email request I made to the director of the Holocaust Center in suburban Detroit. This Center is well run and has a very good agenda and special events commemorating some Jewish calendar days, historical remembrance days as well as lectures with Q &A of some writers who write about the holocaust. However, as you guessed it right, nothing about the Farhud day.

I explained that Farhud is a new marking date and should be given special attention to scheduling events in the future in order to bring awareness of the Jewish refugees from Arab lands. I also explained that this is even more pertinent because several Northern and Western suburban communities post one of the highest concentration of the Arab and Chaldean population is the United States, in addition to its diverse Jewish population. What a place and occasion to break the ice of apathy (if not to say ignorance) of the plight of the Jewish refugees from the Arab lands.

The email was sent on June 2nd, and the Farhud day was June 1st. I also attached the link of the entry in your Blog. I have yet to receive a response acknowledging the receipt of the email. I would not be surprised if I receive the " Thanks, but NO thanks." I'll wait and see. It is safe to be prudent and hopeful that something will be planned for June 1st 2016. Let's hope.