Michael Frank has this thoughtful New York Times travel piece on the last remnants of Morocco's Jewish legacy. But he cannot help but minimise, as is fashionable, the  wretched status of Morocco's dhimmi Jews. He hints at the objectification of unveiled Jewish women. But so desperate is he to emphasise Morocco's shared heritage that he makes the absurd claim that Jews and Muslims venerate the Jewish martyr Sol Hatchuel for her defiance of forced conversion - to Islam. (With thanks: Shaul)

These traces, whether in buildings or objects, or less tangibly in music and stories and memory, were ubiquitous if sometimes elusive in the mellahs of Fez and, as I discovered later, Marrakesh. Some were easily found, others less so; but running like an electrical charge through this rich but disappearing heritage was a palpable sense of urgency about what will happen in the coming years to Morocco’s Jewish legacy.

It was a sparkling morning last fall as I approached the mellah, a 20-minute walk from Fez’s medina, with its vivid theater of hucksterism, artisanship and transport-by-mule. The mellah felt downright slumberous by comparison — and comparison is in a way the point, since geography is so central to this dramatic story of a place and its people: Until I stood at the gate to the mellah, I did not quite grasp the significance of the Sultan’s decision to relocate the Jews within waving distance of his own back door. 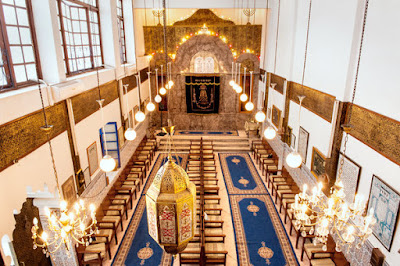 The year was 1438, and this move marked a momentous shift in Moroccan Jewish life. Oral tradition places the Jews in Morocco since just after the destruction of the first temple in Jerusalem in the sixth century B.C. Under Arab rule the climate was for long periods (but not without exception) characterized by a general spirit of tolerance, first formulated in the seventh century, when Jews became known as dhimmi, or “protected persons.” They were free to practice their religion, but they were also required to pay a special poll tax, and they were barred from certain occupations. At times they were allowed to live in the city; at others not. Long stretches of tranquillity were interrupted by sporadic outbreaks of violence.

It was after one particularly extreme attack that the Sultan moved the city’s Jews to a walled neighborhood near his palace on what had once been a salt marsh, or mellah. Mellahs soon appeared in Marrakesh, Rabat, Salé and elsewhere. But whereas European ghettos were established out of a punitive impulse, the Moroccan mellah was — ostensibly — intended to safeguard.

Today the mellah in Fez still feels distinct from the city’s other precincts. The buildings are multistoried, since the limited acreage developed vertically to accommodate a growing population. They are also pierced with windows and fitted with festive balconies, while in the medina most turn a blank facade to the street, in support of the Muslim policy of keeping women concealed.
“Muslims used to come to the mellah to party,” Youness said as we made our way along its market street. “They could drink alcohol and look at unveiled women. Sometimes,” he added with a raised eyebrow, “more than just look.”


Not, presumably, at our first stop, the Danan Synagogue. Named for a rabbinical family that goes back 50 generations, the 17th-century synagogue underwent a major restoration in 1998 under the guidance of Simon Levy, a historian. Congregants at the Danan were megorashim, Jews expelled from Spain, and had a different language, liturgy and place of worship from the toshabim, the Jews who had lived in Morocco before their arrival.

Nothing like a little intramural rivalry to spur synagogue building. Coming along so soon after the establishment of the mellah, the 1492 exodus had an enriching — but for the toshabim also disconcerting — effect on Moroccan life. Sephardic Jews worked as scholars, writers, printers and artisans whose metalwork transformed the local culture. At the Danan there is ample evidence of their abiding flair in the intricate zellij tile work and dashing green carved wooden trim on the bema, the raised platform from which the Torah was read; downstairs a mikvah, or ritual bath, and communal oven attest to the multiple uses the building was once put to.

I found it very moving to stand with Youness in this empty synagogue and afterward in the nearby Slat Al Fassiyine, an equally exquisite 17th-century synagogue named and created for the residents of Fez, rather than the newcomers. Separate synagogues for rivalrous Jews, built close to the same time and within a few blocks of each other? How poignant, even pointless, all this seems now, with nearly everyone gone.

The recent history of Slat Al Fassiyine — a carpet workshop and boxing gym until its meticulous restoration in 2010 and 2011 — in a way encapsulates the tricky present moment in Morocco’s relationship with its Jewish heritage. For if Jews trickled into Morocco during the ancient period and poured in after the Spanish Inquisition, they poured out of the country in a series of hiccupping waves in the middle of the 20th century (the founding of Israel, the end of the French protectorate, the Six-Day and Yom Kippur Wars) that cumulatively convinced the vast majority of Moroccan Jews that their beloved country, which sided with its Arab cousins in times of conflict, fell on the unsafe side of unpredictable.

A dramatic change in such a brief span of time raises many questions. How is so much shared history to be told when so few people are on hand to tell it? How should the abandoned and decaying yet significant urban fabric be preserved, and by whom?

I felt the complexity of these dilemmas everywhere I went in Fez. I felt them in the comments of the boys in the mellah streets. I felt them in the Jewish cemetery, whose graves, only recently fully cataloged, spread over a large sloping plot where notable rabbis are set off in a separate section and prolific offerings (including olives and fruit) are left for Sol Hachuel, a Jewish female saint whom both Jews and Muslims venerate for her defiance of forced conversion, one of several examples of such shared worship that is specific to Morocco.

And I felt it especially in the most particular museum created by Edmond Gabbay in the former school that adjoins the cemetery in Fez. Stepping into Mr. Gabbay’s museum was like entering a three-dimensional story by Jorge Luis Borges. One of the remaining Jews of Fez (under 100, all living in the new city), Mr. Gabbay, 81, has made it his mission to collect and display the goods and chattels the Jews left behind: the passports and report cards; the eye charts; the baskets spilling over with prayer shawls; the stuffed animals; the hats and clothes; the mixing bowls and soccer balls; and the books (“Jane Eyre” next to Simone Signoret next to Maimonides, who lived and wrote in Fez in the 12th century). Why had Mr. Gabbay scooped it all up and laid it all out as a kind of profuse if dizzyingly inverse flea market? “Because it shows that we were here,” he said. “And one day people will forget.”

He was not the only person I met who was preoccupied with the vanished Moroccan Jews.

In Casablanca I visited the Moroccan Jewish Museum, the only Jewish museum in any Arab country, where the more conventional display of Jewish-Berber costumes and jewelry, scores of hands of Fatima pendants, and an entire goldsmith’s workshop from the mellah of Fez express new expectations of inclusion laid out in the preamble to Morocco’s 2011 constitution. Drafted after events of the Arab Spring, it specifically acknowledges the “Hebraic” contributions to the country’s “diverse, indivisible national identity.”

Read article in full
Posted by bataween at Wednesday, June 03, 2015