The Spanish parliament has approved a bill allowing Jews with Spanish roots to become Spanish citizens, the BBC reports. However, they will have to pass a language and culture test. The law takes effect in October and will expire after three years. Israelis of North African origin have expressed an interest, mainly because Spanish citizenship offers opportunities for residence and education in the EU. 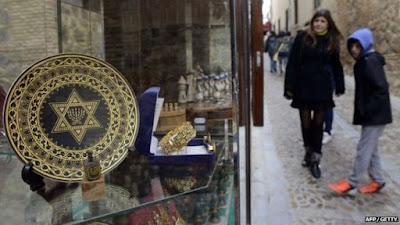 Spain's parliament has approved a law that will ease the path to citizenship for descendants of Jews who fled the country five centuries ago.

It will allow those who can trace their roots to the expelled Jewish community, also known as Sephardic Jews, to apply for a Spanish passport from October. The aim is to correct what Spain's government has called a "historic mistake".

Tens of thousands of Jews were expelled in 1492 during the Spanish Inquisition. Those who remained had to convert to Catholicism or risked being burnt at the stake.

"This law says much about who we were in the past and who we are today and what we want to be in the future - an open, diverse and tolerant Spain," said Spanish Justice Minister Rafael Catala.

The measure will grant dual citizenship to people with Sephardic Jewish roots who have passed a test of Spanish language and culture. There will be an initial window of three years for applications from those who can prove their Spanish Jewish origins.

The Spanish government estimates 90,000 people will apply for citizenship via this route.

But officials have said that there is no exact way of knowing how many of the descendants of Spain's original Jewish community will meet the criteria. Local media report that some 3.5 million people could benefit from the new law.

"Today begins a new stage in the history of relations between Spain and the Jewish world,'' said the Spanish Federation of Jewish Communities in a statement. "
A new period of reunion, dialogue and harmony reintegrating a branch of the nation that was unjustly torn off in its day." The announcement comes two months after Portugal approved a similar plan.