'Seeds of conflict' could sow confusion 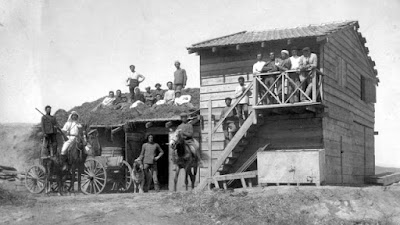 Kibbutz pioneers 'did not understand' Arabs

A documentary to be broadcast tonight on PBS blames the conduct of Jewish pioneers in a particular incident in 1913 for the start of the Arab-Israeli conflict. Lyn Julius offers an alternative perspective in the Times of Israel, claiming the programme obscures a history of persecution of Jews by Arabs in Palestine.

One day in 1913, a group of Arabs stole some grapes from the vineyards of Jewish pioneers in Rehovot. An altercation followed, leaving one Arab camel driver and one Jewish guard dead. The incident marked an irrevocable break between Jews and Arabs in Palestine, and planted the seeds of the Arab-Israeli conflict.

Far-fetched as it may sound, this is the theory advanced by a one-hour PBS documentary, ‘Seeds of Conflict,’ shown in the US on 30 June. Grievances between different communities, once happy to mingle in coffee houses, were allowed to fester, the programme argues, and the conflict soon took on the proportions we know today.

Those most to blame for ruining the hitherto idyllic relationship between Jews, Muslim and Christians, it claims, are the young Ashkenazi Jews of the Second Aliyah, who came to the land of Israel fleeing Czarist pogroms.

Seeds of Conflict, (preview here) which the film-makers say was made in consultation with a number of experts, insists that, according to the Arabic press and complaints of the time, these Jews showed ‘no understanding of the ways of the Arab inhabitants’ — unlike the earlier Jewish inhabitants in Palestine, who were Sephardi and spoke Arabic.

The so-called Old Yishuv was indeed composed of Arabic-speaking Jews who had settled in Tiberias, Jerusalem, Hebron and Safed, boosted by 15th century refugees from the Spanish Inquisition.

But life for these Jews was neither secure nor prosperous, and they subsisted on charitable handouts from abroad. Crucially, they had to ‘know their place’ under Muslim rule. From time to time, the Arab inhabitants made the Jews ‘understand their ways’ — which could consist of bloody pogroms. For instance, in 1834, the Palestinian Arabs of eastern Galilee took advantage of a regional war between Egypt and Turkey to attack their Jewish neighbours in Safed and strip them of everything they had — clothes, property, homes. Jews were beaten to death, sometimes by their own neighbours, synagogues destroyed and holy books desecrated.

The 1929 Hebron massacre targeted mainly members of the Old Yishuv, not the new Zionists from Russia.

The small Sephardi community of Palestine was so abased under Muslim rule that a contingent of Ashkenazi followers of the ‘false Messiah’ Shabbetai Zvi, seeking refuge in Jerusalem in 1700, refused to put up with the humiliations suffered by the Sephardim. “The Arabs behave as proper thugs towards the Jews…” one wrote. Jews could be slapped by passing Muslims, have stones thrown at them by small children, be banned from riding a horse — a noble animal — and suffer all manner of degradation as second-class ‘dhimmis’.

Jews were not allowed to worship freely at their holy places. The Mamluks forbade them from treading beyond the seventh step on the staircase to the burial place of the Patriarchs in Hebron. “Nothing equals the misery and suffering of the Jews of Jerusalem”, wrote Karl Marx. “Turks, Arabs and Moors are the masters in every respect.” To be a dhimmi was to be continually reminded of Islam’s supremacy over Judaism and Christianity.

In truth, it could be argued that the breakdown of the traditional dhimmi relationship was one of the root causes of the Israel-Palestine conflict. Perhaps the decisive incident took place, not in 1913, but in 1908, when the Hashomer Hatza’ir pioneers of Sejera dismissed their Circassian guards — who protected their settlement against Bedouin raids — ­ and replaced them with Jewish guards. For the Jews, this was an ideological statement of self-sufficiency. But for the neighbouring Arab fellaheen, they had crossed a red line. They had reneged on their part of the bargain: the dhimmi, who was not allowed to bear arms, should always look to the Muslim for protection.

The arrival of the young Zionist pioneers, with their socialist vision of a brave new world, threatened to overturn the existing pecking order. Yet many Arabs benefited from the influx of European Jews. As the Jews toiled to drain the swamps and make the desert bloom, waves of Arab immigrants flooded in from neighbouring countries, eager to take advantage of the jobs and prosperity created.

The program’s creators say that 1913: Seeds of Conflict dispels a number of myths and is ‘an admittedly arbitrary glimpse that captures the Palestine of a hundred years ago’. But to substitute a tale of ‘European colonialists’ invading Palestine in order to trouble a multiculturalism of mythical equality would be to indulge in dangerous revisionism.

Read article in full
Posted by bataween at Tuesday, June 30, 2015

I have seen the "Seeds of Conflict" yesterday on Public Broadcasting TV. I was expecting more thant just one event dramatization. When I was a student (long time ago) I was forwarned about the issue of social reductionism. I found that the Seeds of Conflict although not entirely false because it was based on some factual events, it reduces the whole complex issue of Jewish-Arab conflict to a mere event of counter-response of the Kibbutzim defense guards because of some Bedouin stealing grapes.

It was like saying that the civil right movement in the 1960's United States was the work of only Martin Luther King. Or that the World War I, was triggered by the assassination of Franz Ferdinand of Austria in Sarayevo. We know that these are reductionist claims. There are more to these than just a single fact.

Tonight I will eat some grapes, maybe I will get enlightened by some non-reductionist explanations.

Apparently the main influence of the film was Elisha Baskin,(daughter of dovish Gershon) who is/was a member of Jewish Voice for Peace. She could have benefited from a few grapes of wisdom too, Sammish!

Not a word, it seems, about how British officials in the British occupation regime [OETA-South] and the later mandatory regime deliberately incited Arabs to attack Jews. For example, see mentions of Colonel Waters-Taylor in Col. Meinertzhagen's book, Middle East Diary.

It was British officers who worked to get Arabs to set up Muslim-Christian Associations in the period of occupation [1917-1920, OETA-South] before the mandatory govt was set up in 1920.

The purpose of these associations was get Muslims and Christians, never all that loving of each other, to cooperate in opposing the Jews. See Y Porat inter alia.

Sounds to me like this PBS "documentary" is not worth much at all. There were Ashkenazim in Jerusalem back in the 17th century. Some or all of them were called in the official Muslim records [in Arabic or Turkish] al-Aman. Scholars figured out that this referred to Ashkenazim since aleman in Spanish and allemand in French mean German which was the original meaning of Ashkenazi [or referring to all of Germanic northern Europe]. Maybe the Ladino-speaking Sefardim in Jerusalem at that time called them Alemanes.

Be that as it may, large numbers of Ashkenazim were coming to Jerusalem in the 19th century. To be sure, few Ashkenazim identified as such lived in Jerusalem between circa 1730 and 1809 approx, since the Ashkenazi community could not pay Arab creditors who had lent them money to build their synagogue about 1700 and eventually burned down the synagogue in view of the Jews' default. Ashkenazim avoided the city for almost 100 years because Arab creditors demanded that any available Ashkenazi pay for the $$$$ loaned to build the synagogue. The synagogue was later called the Hurva and was destroyed again by Arabs in 1948 and more recently built about 10 years ago.

There were also Ashkenazim in places like Safed, Hebron and Tiberias in the 18th and 19th centuries. Jews --all communities together-- formed a majority in Jerusalem by the mid-19th century.

Al-aman is definitely not aleman. It is a well-known Arabic word that means many things, depending of the context. If it refers to people, it can mean "protected", believers", people in charge of security, honorable, trustworthy and a myriad of other concepts, none of them German. If it refers to things, it can mean a precious deposit, trust and many others thing. If it is associated to concepts, it means someone of confidence, that can be trusted, and more.

Sylvia, I am aware of what aman means in Arabic. That these people were Ashkenazim is the conclusion of historians, not mine. Sorry that I cannot give you references. Maybe it was Amnon Cohen who wrote the article that I read that explained this clearly.