Never too late to have a Barmitzvah!

It's never too late to have a Barmitzvah. Lovely story about an Iraqi-born man who never went through this rite of passage in Baghdad. The Boston Globe reports (with thanks: Lisette): 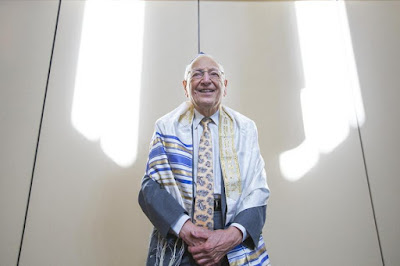 LEXINGTON — In his 86 years, Fred Ezekiel escaped a massacre that killed up to 180 Jews in Baghdad, earned four degrees, became a mechanical engineering professor at MIT, raised a family, and spent 50 years worshiping at Temple Emunah.

But he never had a bar mitzvah. That was until Saturday — two days after his 86th birthday.

Ezekiel’s 73-year journey to his bar mitzvah dates to his childhood in Iraq, where he was raised Jewish in a family that was not observant. His 13th birthday came and went without Ezekiel marking his bar mitzvah.

“We didn’t go to synagogue on shabbat,” he said. “Lots of people from Baghdad have not been bar mitzvahed. It’s not a very common thing like it is in the United States.”

Then eight months ago, Ezekiel said he was “cornered” by his rabbi’s wife, Sharon Levin, and another congregant, Jill Goldenpine, 37. They told him he should have a bar mitzvah.

Read article in full
Posted by bataween at Wednesday, June 17, 2015