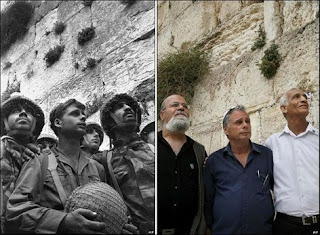 Israeli paratroopers after capturing the Western wall in the old city of Jerusalem in June 1967, and decades later

Israel’s victory in the Six-Day War had dramatic repercussions on the few thousand Jews still living in Arab countries. With the exception of Syria and Iraq where the Jews were kept as virtual hostages, the vast majority of the remaining Jews of Egypt, Libya, Morocco and Tunisia fled in the aftermath of the war, bringing communities established since Biblical times to the brink of extinction. In almost all Arab countries there were demonstrations and anti-Jewish riots. Some Arab governments actively persecuted their Jews as if they were Israelis living their midst.

Over the next few days Point of No Return will focus on what happened to Jews in  individual Arab countries.
Posted by bataween at Friday, June 05, 2015

June 05 2015,
"Lest we forget " Indeed !
One of the most important lessons WE learned from the "Six day War" were from the
'diplomatic" events which preceded it.When the very popular Egyptian dictator, Gamal Abd El Nasser, closed the straits of Tiran to Israeli shipping about one week before: An indisputable act of war if ever there was one.The world "held its breath"
so to speak: Waiting for the reaction from U.S.President LBJ. After all,hadn't America,during President Kennedy's administration,"guaranteed" some kind of "backing" for Israel;If such an event occurred? Guess what.There was no "We've got your back" action from the United States. AND, LBJ was by no means viscerally hostile to Israel or to Jewish interests per se.Unlike the current U.S. administration. He just didn't think it was in America's interests to get involved too quickly. And alienate all those accommodating Arab/Muslim suppliers of cheap, cheap oil to fuel guzzling consumers all over the world. What was so surprising about that ? After all, didn't the first President George Washington sum it all up more than 225 years ago? "Nations do not go about making gifts to one another".
How can such lessons be applied to the interesting dilemma that confronts US to-day ? Israel knows what has to be done.Use the maniacal & irreversible decomposition of the Arab/Muslim world to her own advantage. No more Sinai diktats. No more "Oslo" type obscenities.
But do WE, the Jews of the Diaspora, have the will and the courage to make a Washington style "gift" to ourselves? By executing a well planned and globally coordinated campaign against our most vulnerable& unapologetic enemies,and THEIR well-greased dhimmis outside the Muslim orient ? At the most local levels. No names please. WE, at each & every coordinate on the planet, know who THEY are and where they "live". Let it be THEM, who have to worry about where & when the next blow will land.

Norman, it was Eisenhower who had guaranteed to keep the Straits of Tiran open to Israeli shipping in 1957 after the Sinai Campaign of 1956.

See link for the text of Eisenhower's statement:
http://ziontruth.blogspot.co.il/search?q=eisenhower+egypt

Thanks for your help regarding the president whose administration "guaranteed"
Israel's access to the Straits of Tiran. Interesting year,1957. Wasn't that the second time Israel was forced out of Sinai ? Remember 1949 ? So Eisenhower was the second perpetrator of a Sinai "Diktat". I think you "fellows" get the point. A fourth Sinai campaign is inevitable. Israel cannot afford to be "Mister Nice guy" again.

What about US in the Diaspora ? When do WE finally reach the "I'M MAD AS HELL AND WON'T TAKE IT ANY MORE" stage ? Direct action, NOT a "dialogue" with the damned and their lib-left dhimmis.