Jews are our cousins, say Kurds

Did you know that Shimon Peres was a Kurd? Seth Frantzman, who writes for the Jerusalem Post, found much sympathy for Israel when he visited Kurdistan. Here is his report, published in The Forward: 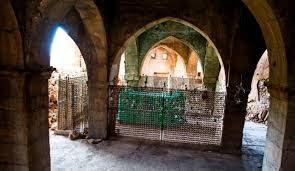 The tomb of Nahum...hard to find (photo: Haaretz)

Writing for an Israeli newspaper, flying over territory held by ISIS to a Muslim country in the heart of the Middle East could create difficulties. “Don’t worry, they love Israelis here,” Huff told me. He asked if I could bring along a prayer book. I had also been in touch with an organization called Shevet Achim, which helps children with life-threatening heart problems by flying them to Israel for treatment. “Can you bring us Polycose, a dietary powder? There is an extremely malnourished child who needs it,” their local volunteer asked. So we had two large canisters with giant Hebrew writing on them, and I couldn’t stop thinking how odd it would look at customs: a Jewish prayer book, and some canisters full of white powder.

On the ground in Kurdistan. all fears were allayed. Old peshmerga fighters cradling AK-47s reminisced about the 1960s, when Israel helped them in the war against Saddam Hussein.

“My uncle went to Israel through Iran in the 1960s to be trained. Israelis came here to the mountains to help us,” one told me. There is a warm affinity for Jews among many Kurds. “Did you know that in most Muslim countries Jews could not carry weapons and had to wear a distinctive ‘Jewish’ dress ( a sign of dhimmitude - ed),” a Kurdish professor from Syria living in Erbil noted. “Jews in Kurdistan carried weapons and dressed like us and had the tribal names of our tribes.” One Kurdish fighter was convinced there is a mountain named Peres in Kurdistan that proves Shimon Peres is Kurdish. “Israel is a brave country fighting all the time against the enemy; they are in everyday war and they are like us, except we have been fighting since before 1948 for our independence,” another Kurdish officer explained.

Overlooking the Nineveh plain, with its yellowish parched grasslands that fan out around the large city of Mosul, which is held by ISIS, is the ancient Christian village of Al-Qosh. Before 1948 there was a Jewish community here and a synagogue with the prophet Nahum’s grave. After passing through a checkpoint to get into the village, we inquired about its location, but people seemed uninterested in helping us locate the building. Although recent reports claimed that the tomb is “in danger from ISIS,” the fact is, the Jewish heritage faces danger only from neglect. After 2008 a corrugated metal roof was built over the ancient brownstone structure whose roof is caved in. A Hebrew inscription is mounted on one wall. Rubble and barbed wire adorn the place. The old Jewish quarter is easily identifiable by the houses left in ruins nearby. Looking for the grave and being sent in circles on the hot day, I joked to our Kurdish colleague from Duhok, “Even the prophet Nahum couldn’t find his own tomb.”

It reminded me that all is not what it seems in Kurdistan and Iraq. Here was a Christian village whose residents seem nonplussed by tourists looking for a Jewish site, and here was a large Muslim nation of millions with a keen interest in Jewish heritage. In Erbil we met an Arab professor from Mosul whose family chose to stay and live under ISIS. One of the professor’s close friends on Facebook is a Jewish academic. “ISIS uses religion as a mask, but we must all relate to each other as people first,” the professor said. Even bookshops in Erbil sold history books on the Jews of Kurdistan with a small Star of David on them. Biographies of Golda Meir were also on offer.

Many Kurds asked us why Jews who left Kurdistan don’t come back. A former government minister from the Patriotic Union of Kurdistan told us: “In some places there is anti-Semitic propaganda, but not in Kurdistan. Even if we critique the policy of Israel, you cannot confuse Jewish people and the politics of Netanyahu.” Back with the peshmerga , sitting under the scorching sun 30 kilometers from Mosul, a 50-year-old officer boasted to us that he had killed two ISIS fighters with his Soviet-made AK-47. “We are proud to have journalists from the U.S. or Israel here. You are our cousins.”

Interesting. I was aware of the role the Kurds played in helping Jews flee Iraq back in the 60s and 70s, but not about the role Israeli defence played in assisting the Kurds