How Jewish refugees can respond to BDS 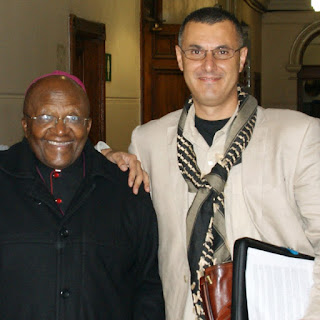 The man behind the BDS movement, Omar Barghouti, has given an interview to 972 Magazine explaining the aims of the BDS movement (Boycott, Divestment and Sanctions) against Israel.

"Israel's deepest injustice", he says, " is the denial of the right of return to Palestinian refugees."

Couched in the language of human rights, Barghouti is advocating in no uncertain terms  the destruction of Israel by overwhelming it demographically with millions of returning Palestinian Arab refugees.

BDS is old wine in new bottles: Arabs joined Nazis in boycotting Jewish businesses in the 1930s; the Arab League declared a trade boycott of Israel. The reason why BDS has appeared to gain traction is the support of  'human-rights' NGOs, some churches and on campus.

The fundamental injustice of the BDS position is apparent if you consider that 51 percent of Israeli Jews are in Israel because the Jewish state gave them refuge from Arab and Muslim antisemitism.

This Arab Muslim antisemitism was not a consequence of the establishment of the state of Israel, but created the need for a country where Jews could exercise a right of self-defence. Together with indigenous Christian groups such as Copts and Assyrians, Jews in the Arab and Muslim world had to submit to a form of 'colonisation' as 'dhimmis'.

Jews were utterly at the mercy of their Muslim rulers for 14 centuries.

There is no doubt as to the antisemitic motives underlying BDS. In the 20th century, the Palestinian Mufti of Jerusalem was complicit in a genocidal project that would have destroyed not only the Jews of Palestine, but Jews all over the Arab world - before Israel's creation . The Palestinians have never been called to account for their genocidal objectives, and still today these racist aims are enshrined in the Hamas charter. Today Hamas is in a unity government with Fatah.

After failing to annihilate the young state of Israel,  Arab Muslim antisemitism created 870,000 Jewish refugees, driven from their homes in Arab states and dispossessed of their property.

But these Jewish refugees are invisible, as far as the BDS movement is concerned.

Israel represents the liberation of colonised Jews from the yoke of Arab and Muslim rule. It is the expression of the  right to self-determination of the Jewish people, a right enshrined under Article 80 of the UN Charter.

The Jewish people are an authentic Middle Eastern people in continuous residence in the region - 1, 000 years before Arab Muslim imperialism and colonisation.

A right of return for Palestinian refugees cannot be considered without also considering the same right for the 870, 000 Jewish refugees. But returning to hostile states where antisemitism is endemic is hardly a solution. Peace should instead be founded on the concept of an irrevocable exchange of refugee populations.

For a genuine peace based on truth and justice, the BDS movement and Arab states generally, need to acknowledge the fundamental injustice done to Jewish refugees from Arab countries. Jewish refugees do not want a right of return to Arab states, but an apology for their suffering and compensation for their losses.

The rest of the world needs to call account the Arab and Muslim world for the injustices perpetrated against their Jewish and  non-Muslim minorities and to recognise the rights of non-Arab peoples in the Middle East and North Africa to self-determination.

He should be barred from re entering Israel the next time he leaves. What better way for him to stand with the courage of his own convictions? The next time he flies away, tear up his passport, void his citizenship.

The BDS movement leadership is not the problem. They're not the ones who deal with it. They have delegated the problem of Jewish refugees from Arab lands to the Jewish radical left who have been entrusted with the job of erasing from consciousness and history to the existence of Jews from Arab countries. They don't exist, never existed, their religious legacy doesn't exist, and therefore the issue of refugees is a moot point.


In Israel the radical left uses euphemisms to attack Mizrahim, Sephardim. They don't even mention Arab Jews anymore. They are the talisman kissers or the behemot. We remember the garbuz speech addressing "those kneeling n the grave of saints" in recent days the Israelis have been irate over another euphemism by an Israeli actor who insulted "those behind the thirty Likud mandates" as "behemot", curd-eating cattle. And everyone knows who they mean.

I think that instead of the Barghouti photograph, that of the "Jewish" Voice of peace in action would be appropriate.
Check their animated "history of the holy land" on their website.

It is true that the radical left does the heavy-lifting for BDS. Even the 'soft left' refuses to take the rights of Jewish refugees seriously. They are too busy trying to build bridges with the Palestinians. Any talk of Jewish refugees is an obstacle, an unneccessary spanner in the peace works. Add to this their European contempt for Middle Eastern Jews and their benighted superstitions and traditions - to which you refer, Sylvia.

And I am not even mentioning "the missing panel".

Something should be done and fast. Because history and existence are just the tip of the iceberg. Orthodox, national-religious, and other movements have also an interest erasing Sephardic identity, though not for the same reasons as the left.

I am thinking of additional websites discussing history and Sephardic thought in depth.

I meant: I am thinking additional websites should be set up to discuss history and Sephardic thought in depth and provide a much wider presence on the web.

From JVP:"In fact, Jews and Arabs have been fighting for only about a century. While Jews were facing repeated expulsion and persecution in Europe, Jews in the Muslim world, though still facing some problems, were faring much better. Jews, as People of the Book under Islamic law, were entitled to legal protections and certain rights. To be sure, they were not the equals of Muslims, and there were incidents of anti-Semitism in many parts of the Muslim and Arab world through the centuries, some of them serious. But both the severity and the frequency of these were far lower than in Europe."

Well I'm not so sure about that.