Doyen of Burma synagogue is dead

He used to sit in his sarong outside Yangon's only synagogue in the hope that enough tourists would, that day, make up the minyan, or quorum of 10 men, needed for a service. His father refused to leave Burma during the wartime Japanese occupation. Now Moses Samuels is dead, the Jerusalem Post reports: 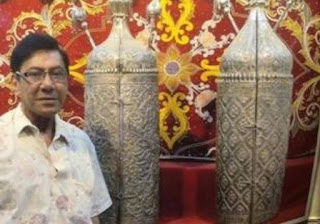 Moses Samuels, the longtime leader of the Jewish community of Myanmar, died on Friday. He was 65.

According to Public Radio International, he had been suffering from throat cancer for two years.

“Of Iraqi Jewish descent, Moses Samuels continued the work of his father in caring for the synagogue and Jewish community for over 35 years,” the community said in a statement on Monday.

“He certainly kept Judaism alive with a profound love for his heritage and was an inspiration to many people, a helping and warm hand to all visitors who came to the synagogue in Yangon, Myanmar.

He treated everyone with equal respect and dignity with an open door – no matter if they are Jewish or Buddhist, Muslim or Christian, Hindu or Baha’i.”

Jews first came to Myanmar, formerly Burma, in the late 18th century. With a peak population of between 1,200 and 2,500, the community is now “teeter[ing] on the verge of extinction,” according to the Jewish Times Asia.