Writing in  American Thinker, Jeff Lipkes explains the root cause of the Middle East conflict, the only one of 20th century conflicts where the population transfer of refugees failed. Read it all! 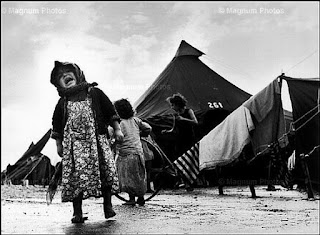 There were often transfers of populations.  An ethnic or religious group fleeing a new country was replaced by individuals who had been ousted in turn from a neighboring country.  The dusty columns of refugees, the packed trains, the crammed ferries passed each other.  It’s worth taking a look at three of these exchanges of populations (out of some 50), because what happened in the Middle East in the years after 1948 was a failed population transfer.  Or, rather, a thwarted one.  For the first and only time in the 20th century, a people turned their backs on their own kinsmen.  That decision is at the root of the crisis Israel faces today.

1.  Greeks had lived on both sides of the Aegean Sea for at least 3,000 years.  Western Anatolia was called Ionia, and its cities were the birthplace of Western poetry, philosophy, and art.  Homer was supposed to have been an Ionian.  So was Heraclitus, the greatest pre-Socratic philosopher.

When the Ottoman Empire was divided by the Treaty of Sèvres in 1920, the Greeks were given control of this coastal region, pending a plebiscite in five years.   They had already invaded Anatolia the previous May, following the surrender of the Ottoman Empire to the British.  After initial successes, the Greeks suffered a crushing defeat in August 1921.  Their lines were over-extended, the French switched sides, joining the Soviet Union and Italy in supporting the Turks, the army was demoralized by purges, and it faced a formidable opponent in Ataturk.  The Greeks had committed atrocities against Muslim villages both as they advanced and retreated, and the Turks upped the ante when they retaliated.  Some 440,000 Armenians and 260,000 Greek civilians were killed as Ataturk’s army swept westward.  In the exchange of population that followed, over 1.2 million Greeks crossed the Aegean, while about 350,000 Muslims were expelled from Greece.

The refugees were welcomed into their new homelands.  But, not surprisingly, the persecution of Christians continued in Turkey.  After a pogrom in September 1955 in Istanbul, only 2,500 Greeks remained in the country.  Over 200,000 had lived in the former capital of the Byzantine Empire during the 1920s.  Meanwhile, the Muslim population in Greece increased to about 150,000.
2.  In the closing months of World War II, Germans fled en masse ahead of the Soviet Army.  After the war, ethnic Germans were expelled from the Netherlands, Poland, Czechoslovakia, Hungary, the Ukraine, and Romania.  Some 12 to 14 million people trekked west or south.  An estimated 500,000 to 2.25 million refugees were killed.  The totals are hotly contested.
Some were colonists of the Third Reich, but the overwhelming majority were descended from ancestors who began settling in Central Europe in the 13th century.  East of the Oder-Neisse Line, the new border, were Prussian, Pomeranian, and Silesian lands regarded as German for centuries, and famous medieval cities like Danzig, Stettin, Breslau, and Königsberg.   But Germany, like Greece in 1922, had lost the war, and civilians were paying the price for the unspeakable atrocities of the National Socialist occupation and for the activities of German minorities in the inter-war period.

This was the largest mass-movement of human beings in history.  The record, however, lasted only one year.
3.  In July 1947, India was granted independence.  Much to the amazement of Gandhi, Nehru, and Jinnah, who imagined that the hostility between Muslims and Hindus and Sikhs was the result of the machinations of the British, pursuing a strategy of divide and rule, members of the three religious communities immediately began slaughtering each other.  Not surprisingly, it was the Muslims who began the killings, just as Direct Action Day in Calcutta in 1946, the great Muslim League rally on behalf of an independent Pakistan, kicked off with a massacre of Hindus.  The violence after partition was all the more brutal as most of the victims were clubbed, hacked, or stabbed to death rather than shot.  The death toll, contested as always, was probably somewhere between 600,000 and 1.5 million.
Hindus and Sikhs from the Pubjab and Hindus from East Bengal were welcomed by the new government in Delhi.  So were the Muslims who’d moved to what had become West Pakistan and East Pakistan.  Under far more difficult conditions the previous year, ethnic Germans from Central Europe were welcomed into the new Federal Republic of Germany.  Its cities were in ruins, its economy moribund, but the refugees were provided with food and shelter, and, eventually, housing and jobs.  The Greeks, earlier, had also faced a daunting task in providing for the influx of their Anatolian cousins.  The refugees increased the population by 20% -- as if 63 million Americans had been driven out of Canada and crossed the border.  The Greek economy was weak.  The drachma was twice devaluated by 50% during the ‘20s.  But the newcomers were provided with land and over 50,000 homes were constructed for them.
In 1948, there was still another population transfer.  Again, it followed a war.  But whereas in 1922, 1945-6, and 1947, those on the losing side were brutally slaughtered in the hundreds of thousands, their homes pillaged, their neighborhoods destroyed, this time there were occasions when the victors pleaded with the vanquished to remain.  And the numbers were miniscule compared to the millions displaced earlier in the decade, and in the ‘20s.
In the population exchange that followed the war for Israel’s independence, some 583,000 to 633,000 Arabs fled the new state.  (Figures range from about 475,000 to 850,000; the official Israeli total is 550,000.  Efraim Karsh provides a detailed summary.)  About 146,000 to 160,000 chose to remain.  The Arab population of Israel today is 1,660,000.  This thriving community, which enjoys rights no other Arabs do in the Middle East, took a pass on the Arab Spring in 2011.
There is an endless and contentious debate about what motivated the Arabs to flee.  The inhabitants of some villages in strategic zones and along roads were expelled by Haganah; there were attacks on civilians in a few other villages during military operations, famously and controversially, Deir Yassin and Lydda.
Many others fled at the urging of the leaders of the five Arab nations invading the territory of the new state, so as not to impede the attacking armies.  They would, after all, soon be returning to their homes, and local Arab leaders had already decamped for Beirut and Damascus.  In some areas, Jews urged the Arabs to remain, dispatching trucks with loudspeakers -- something that certainly did not happen in Anatolia, in the Punjab and Bengal, in Bohemia, Moravia, Silesia, etc.
Meanwhile, around 820,000 Sephardic Jews were expelled from their homelands in the Middle East.  The immediate causes of the flood of refugees also varied, but it was nearly always violence against Jews, with government complicity -- pogroms, riots, attacks.  Sometimes it was the arrest and trial of leading Jews on trumped up charges, the confiscation of property, legislation directed against Jews, etc. -- actions taken directly by governments.  Of the total fleeing Arab lands and Iran, about 586,000 emigrated to Israel.
We know the rest of the story all too well.  The Jewish refugees were settled in Israel and quickly absorbed.  The Arabs, eventually to be called “Palestinians,” were for the most part housed in refugee camps in the Gaza Strip and West Bank, and in Lebanon, Syria, and Jordan.
Read article in full:
Posted by bataween at Friday, June 19, 2015

Some comments:
-- before WW One non-Muslims --Jews & Christians-- were a solid majority in Constantinople, as Istanbul was originally called. The Greeks alone may have been a majority but certainly Greeks, Jews, Armenians and Bulgarians made up a majority easily.

-- the leaders of the Allied states, Stalin, Churchill, and Roosevelt basically approved of these expulsions of ethnic Germans at the Yalta conference in 1945

-- The Greeks were promised by the Allies, the Entente powers, that they could take southwestern Anatolia, Ionia more or less, as a reward for joining the war.

-- the Greek army was winning as it crossed through Anatolia but was ordered to stop, that is it was betrayed, by the Supreme Allied Council [of the Entente powers] in 1921. This left the Greeks with hard to defend lines which enabled a Turkish victory on the counter-attack. If the Greeks had won, it would have made a big difference in subsequent history. Some of the top Greek leaders like Venizelos were pro-Zionist.

This article is not about general population transfers per se. It is about the Palestinian Arab refugees specifically. My question is "why?" In 1947-1949, the Arabs embarked on a war of annihilation against the Jews. The Jews won - somewhat - and survived and the Arabs lost. Not being annihilated was Israel's biggest crime. So personally, I don't care how the Arabs became refugees. I don't care if Israel expelled them or they left by other means. Let them suffer. That's what they're good at anyway.

"Many others fled at the urging of the leaders of the five Arab nations invading the territory of the new state, so as not to impede the attacking armies."

According to Muslim teaching, Muslims should not live under non-Muslim rule or subject to non-Muslims. Hence, it was perfectly normal by Islamic law for Arab-Muslim leaders to tell Arabs to leave the war zones both to avoid getting in the way of Arab troops and to avoid living under Jewish, that is non-Muslim rule. Turkish historian Kemal Karpat described this rule in Muslim law and gave as an example the emigration of Tatars --also called Crimean Tatars-- from their khanate which was located in the Crimea of today plus the area of southern and southeastern Ukraine of today. Up to the last quarter of the 18th century, up to about 1774 --with some areas conquered by Russia a few years later-- that vast region, now disputed in part between Russia and Ukraine, was part of a Muslim-Turkic khanate. In that case, Muslims did not want to live under Russian rule and migrated to the Ottoman Empire, of which the Crimean khanate had been loose suzerainty.

It appears that observance of that same rule was urged on Palestinian Arabs by their leadership in the Arab Higher Committee in 1948.

Interesting. Of course the Arabs never expected in their wildest dreams that the Jews would win this war, so the population was ordered to get out of the way temporarily so that they could march back in in triumph.