Travels of a tray from Iraq to Israel via Canada 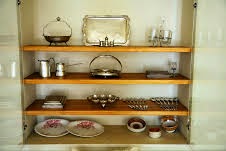 The silver tray, once in the possession of Iraqi Jews, now takes pride of place on the top shelf of a display at the Or Yehuda Babylonian Heritage Museum in Israel.

This is the remarkable story of the travels of a silver tray, looted from its Jewish owners in the 1941 pogrom known as the Farhud. It is told by Hussein Al-Hilli, an Iraqi Muslim journalist writing in al-Wanaltaqy. Linda Menuhin tells the story in i24 News:

Hussein Alhili, a Muslim Iraqi photographer and producer, had to flee Iraq shortly after the Gulf War in 1991. Alhili, currently living in Montreal, maintains good relationships with the Iraqi Jews who live there.

In his homeland he worked for foreign media outlets, which made him a perennial suspect in the eyes of the regime. Alhili decided to flee the country with his family. Aided by a Jordanian official, he managed to get his wife and two sons an extended visa to stay in Jordan and they quickly left for Amman.
Upon arrival in Amman, Alhili’s wife asked him to buy an expensive gift for the Jordanian official who had helped them. Alhili visited a Baghdad antique shop where the owner showed him various beautiful items, but none to his liking. Finally the store owner locked the door, went down to the basement and returned holding an impressive silver tray, which had the name of an Iraqi Jew engraved on its handle: “Yehoshua Jangana 1920.”

“This is a rare and precious tray that used to belong to the Jews of Iraq,” the man said. Alhili didi not know much about the Jewish community of Iraq and its history, but he did remember his grandmother’s stories about her Jewish neighbors in the city of Hilla, who in early 1950 were forced to leave hurriedly, abandoning their possessions, in order to immigrate to Israel. After some bargaining, Alhili bought the tray for $200.

Soon, Alhili himself was also forced to flee after a friend told him he had seen a letter with his name, written by a minister. Alhili didn’t wait to find out what it was about. He collected some personal items, leaving behind most of his possessions - even a fridge full of food - but not forgetting to take the silver tray. Disguising his appearance, he left Baghdad to join his family in Jordan.

However, by the time he got there, the Jordanian benefactor had disappeared and the tray moved with the family to Canada, where they sought to build a new life.
Once in Montreal, Alhili was required to choose a family doctor. He asked an Iraqi acquaintance, a veteran resident of Montreal, to recommend a good doctor. “There’s a doctor named Ahsan Samara, to whom many Iraqis go, but I don’t know if you’ll want to go to him because he’s Jewish,” the man said. “On the contrary,” Alhili answered. “I’d be happy to meet Jews after hearing so much about them.”

Alhili and Samara took to each other immediately and the two became fast friends. During their longtime friendship Samara lent Alhili books written by Iraqi Jews who had immigrated to Israel. Alhili was shocked to read about the Farhud Massacre - the pogrom or "violent dispossession" carried out against the Jewish population of Baghdad on June 1–2, 1941. The riots, which occurred on the Jewish holiday of Shavuot, broke out in a power vacuum following the collapse of the pro-Nazi government. Over 180 Jews were killed and 1,000 injured, and up to 300-400 rioters were killed in the attempt to quell the violence. Looting of property took place and 900 Jewish homes were destroyed.

The horrific event, Alhili said, weighed heavy on his heart, as did the silver tray. He felt the tray was robbed from its legal owners and must be returned to Jewish ownership. Alhili and his wife decided to give the tray to his Jewish doctor as a gift.

Moved by the gesture, Samara suggested Alhili give the tray, instead, to the

Babylonian Jewry Heritage Center"Tray with 1920 inscription of name of Iraqi Jew"in Israel. As fate would have it, Anwar Shahin, one of the leaders of the Jewish community in Montreal, was going to Israel. Shahin, who like Alhili was also originally from the town of Hila, agreed to take the tray with him. Thus after decades, the journey that began in Baghdad, continued through Amman and Montreal, ended in Israel, where the tray finally found its resting placed at the museum.
The story of the wandering tray has since been published on the web site www.wanaltaqy.com - Arabic for “we shall meet again”). In writing it, the Iraqi exile drew a parallel between the injustice done to the Jews, and the abuse of all the innocents in Iraq. And this is what he wrote:

“On a winter day I sit with my wife in our home in Montreal, both of us sipping hot tea, and I wonder out loud about my fate and that of Iraqi Jewry. I asked myself: What is really the difference between us? Our disposession is the same. The problem is not Saddam Hussein and his regime. The Jewish of Iraq were exposed to persecution for decades before Saddam’s regime.”

Alhili’s story generated a lot of reaction in Baghdad, Iraq’s bleeding capital, which can now openly talk about missing its Jews.