Nazis no longer 'a product of the Oriental imagination' 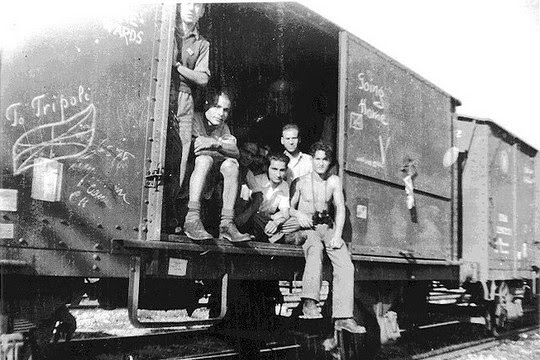 The author, Yossi Sucary, writing in + 972 Magazine, takes a sarcastic (yet poetic) swipe at the Israeli establishment for daring to suggest that the plight  of  Libyan Jews during WW2 was a figment of the Oriental imagination. The Jews who ended up in Bergen Belsen were those with British passports. All are thought to have survived. It is an exaggeration to say that 'thousands of Libyan Jews were massacred by the Nazis' - several hundred died in camps like Giado, but most casualties were a result of the bombing, mostly by the Allies.

I wanted the believe that the Nazis’ bullets, which struck the heads of my mother’s 12 and 13-year-old cousins with frightening precision, accidentally missed the history books of the State of Israel.

I wanted to believe that my grandmother, who was taken from the blazing heat of the Sahara Desert, where she lived as a free and loving woman, on a three-year journey that ended in Bergen Belsen concentration camp in snowy Germany, could not be contained in the pages of history of the State of Israel, because her feet were simply too lazy to take her to the Education Ministry and tell the people there about it.

I wanted to believe that I learned, over and over again, about the 49 people who were murdered during the Kishinev pogrom of 1903, but I didn’t learn a thing about the thousands of Jews from Libya who were massacred by the Nazis in the Jado, Gharyan, Said al Aziz, Bergen Belsen and Birenbach Reiss concentration camps, all due to a silly mistake by a lowly clerk in the Education Ministry of the State of Israel.

I wanted to believe that my mother’s cries, who for years woke up crying in the middle of the night, in a mix of Arabic and Italian, fearing that the Germans were coming to take her, were not heard by a single writer of history, only because it was too soft, and it is her fault that she did not cry louder.

I wanted to believe that when Nachum Goldman, the President of the World Zionist Organization, rejected my aunt Saloma, who asked to receive reparations after her young son was shot at point-blank range by the Germans, he did so because he truly believed his own words: “You have never seen a German in your life, you have an Oriental imagination.”

In fact, I wanted to believe that Israel was not interested in erasing the history of part of its citizenry, but rather was interested in changing what was said about it. This is why I wrote my book “Benghazi—Bergen-Belsen” on black pages — the kind that the State cannot easily scribble on.

Just who does Sucary have in mind when he talks about the Israeli "establishment"? People appointed by Labor-Meretz/Mapam governments and Labor-Meretz/Mapam ministers have always dominated the curriculum in the state schools [mamlakhti]. Nahum Goldmann was close to the Labor Party and was in favor of the European Community leadership against Israel. Goldmann always wanted Israel to make concessions to the Arabs in order to please the Europeans and Americans.

The Likud is not perfect in this regard. However, Minister Sylvan Shalom represented the Netanyahu government several years ago at the commemoration in Poland of the Holocaust and he explained at the time how his own family had suffered at the hands of the Nazis in Tunisia.