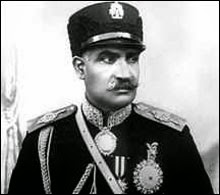 The Holocaust cartoon contest announced by the Iranian regime is symbolic of the Ayatollahs' antisemitism. But it is not widely know that pro-Nazi sympathies were widespread in 1930s Iran, to the point that Shah Reza Pahlavi I changed the country's name from Persia in order to stress his nation's 'aryan' character. Britain and the Soviet Union feared that, with its immense oil reserves, Iran was so close to falling into German hands that they invaded it in 1941 and unseated the Shah.  Here is an article in The Independent Sentinel explaining the origins of the name 'Iran':

Since the time of Zoroaster (circa 1000 BC), Iranians have called their country “Aryānām” (the equivalent of “Iran” in the proto-Iranian language). Iran was the name used by its native people. It means “Land of the Aryans” in Persian.
In the early 1900’s and on, Iran aligned itself with various foreign governments to balance the influence exerted by the British and Russians. They increasingly came under the influence of Germany who played on their identity as Aryans to form an alliance.

Aryan race became almost solely defined by racialist thought with the rise of Adolf Hitler who espoused the belief that Germanic peoples were superior racially. This concept was promoted among Iranians during this period.
In 1933, the year Hitler came to power,  the Third Reich began to publish a racist magazine titled lran-e Bastan (The Ancient Iran). The journal was financed by Siemens-Schukken and pro-Nazi Iranian intellectuals. It referred to Hitler as “one of the greatest men in the world.” It depicted him as the man who ended the alleged 200 year old plot by Jews against the nationalities of the world, especially the Aryans.

The journal also claimed that the swastika was a symbol of Iranians from 2000 years before Christ and they rejoiced over its use as a symbol of German pride and of unity between the Iranian and German peoples.

In 1935, Reza Shah asked foreign delegates to refer to Persia as Iran. The Iranian Ministry of Foreign Affairs then requested that all foreign embassies in Tehran refer to the country as Iran and they obliged.

The suggestion for the change of the country’s official name to Iran is said to have come from the Iranian ambassador to Germany, who came under the influence of the Nazis.

German friends of the ambassador convinced him that the name change would free his country from the past influences of the British and Russians. It would be a new beginning as an Aryan nation.

Many Persian elites and intellectuals nurtured the idea of Aryan superiority.


“Germany was our age-old and natural ally, Love of Germany was synonymous with love for Iran. The sound of German officers’ footsteps was heard on the shores of the Nile. Swastika flags were flying from the outskirts of Moscow to the peaks of the Caucasus Mts. Iranian patriots eagerly awaited the arrival of their old allies. My friend and I would spin tales about the grandeur of the superior race. We considered Germany the chosen representative of this race in Europe and Iran its representative in Asia. The right to life and role was ours. Others had no choice but submission and slavery. We discarded the old maps and remade Iran into a country larger than what it was in Achaemenian times.”

Advocating the common Aryan ancestry of ‘the two Nations’ … the Reich Cabinet issued a special decree [in 1936] exempting Iranians from the restrictions of the Nuremberg Racial Laws on the grounds that they were ‘pure blooded Aryans.'”

In 1939, the Nazis provided Persians with what they called a German Scientific Library. The library contained over 7.500 books carefully selected “to convince lranian readers…of the kinship between the National Socialist Reich and the “Aryan culture” of Iran.”  In various pro-Nazi publications, lectures, speeches, and ceremonies, parallels were drawn between the Shah of Iran and Hitler, and praise the charisma and virtue of the Fuhrerprinzip [Fuhrerprinzip is the principle that the führer’s word is above all written law].
Hitler became a national Iranian hero as he talked about their mutually oppressed Aryan peoples.

By 1939 Germany surpassed Russia as Iran’s major trading partner. There were rumors that there were large German enclaves in Iran. Reza Shah openly admired Hitler’s Aryan race propaganda. Those forces gave the Russians and British a reason to invade Iran on the 25th of August 1941.

After the allied invasion of Iran in 1941 and later, after Iran nationalized the oil industry, the country gained fame and the name Iran stuck, Persia was rarely used.

A failed attempt to turn it back to Persia was made by the Shah in 1959.

The Germans could have cared less about an "Aryan master race". They just used that as an excuse to justify persecuting and killing Jews. If they were so Aryan-centric, why were they allies of the non-Aryan Italians, Japanese, Arabs and other non-Aryans around the world?