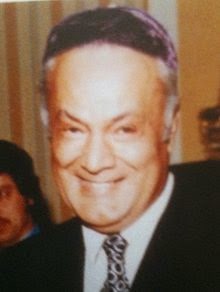 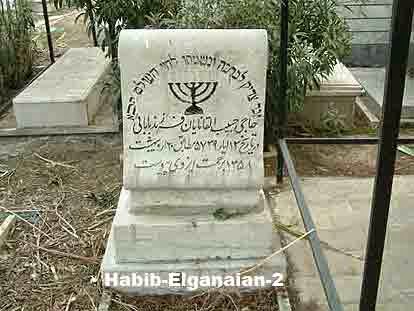 The Ayatollahs cannot claim credit for the Golden Age of Iranian Jews  under the Shahs. Indeed they are peddling a rosy picture of Iranian-Jewish history that has no bearing in reality, argues Shahrzad Elghanian, the grand-daughter of Habib Elghanian (pictured), the community head and businessman executed in 1979. Interestingly, Elghanian had already irked a Shi'a cleric by building Tehran's tallest building, in defiance of traditional dhimmi rules. Article in the Washington Post (with thanks: Lily):


Until Iran’s leaders decide to get their facts straight about Jews, they should stay quiet on the subject. No, I’m not talking about former Iranian president Mahmoud Ahmadinejad’s Holocaust-denying antics. These days, as Iran’s leaders try to soften their image to seal a deal to limit the country’s nuclear program in exchange for lifting sanctions, they’re peddling a revised and rosy version of Iran’s own 2,600-year Jewish history.

Asked by NBC’s Ann Curry during recent talks in Switzerland whether Iranian leaders understand why Jews have been wary of their rhetoric, Foreign Minister Mohammad Javad Zarif said, “We have a history of tolerance and cooperation and living together in coexistence with our own Jewish people, and with — Jews everywhere in the world.”

That’s not quite right. Iran’s Jews did have something of a golden age relatively recently, but Zarif, in his role as representative of a regime that eschews pre-revolutionary Iran, can’t take credit for it. That era was a brief period when the conservative Shiite clergy were stripped of their power — after the Constitutional Revolution of 1906 gave Iranians of all religions and ethnicity equal rights, and before  Ayatollah Ruhollah Khomeini came to power in 1979.

Jews have lived in Iran since 586 B.C. In the 16th century, conservative Shiite scholars and clergy under the Safavid dynasty had restrictions placed on all minorities, including Jews, to bar them from economic activity and to prevent them from passing their “ritual impurity” to Muslims: Don’t open shops in the bazaar, don’t build attractive residences, don’t buy homes from Muslims, don’t give your children Muslim names, don’t use Muslim public baths, don’t leave your house when it rains or snows, don’t touch anything when entering Muslim shops. Jews weren’t protected by the legal criminal system, but they could convert on the spot to save their lives if attacked by Muslims. There were short periods of reprieve here and there but as a whole, life was pretty grim for the next several centuries. (For more on Jewish history in Iran, see Houman Sarshar’s “Esther’s Children.”)

Late in the 19th century, French and British Jews lobbied to establish schools for Jews, and eventually Iranian-Jewish philanthropists, with the help of Israeli organizations, funded a network of schools in the country. After Reza Shah founded the Pahlavi dynasty in 1925, he started a modernizing spree in which Jews participated and prospered. By 1979, according to David Sitton’s study of Sephardic Jewish communities, 80 percent of Iran’s estimated 80,000 to 100,000 Jews were middle class or higher, and 10 percent were part of the economic elite. Jews were not only successful businessmen, but also prominent university professors, journalists and doctors.

It was during that window of relative Jewish affluence that my grandfather Habib Elghanian, born in 1912, became one of Iran’s most famous industrialists, after he and his brothers introduced the plastics industry to the country in the late 1940s. In 1959, he was elected the chairman of the country’s Jewish association.
Still, some members of the clergy were uncomfortable that a Jew had become so successful. In 1962, when my family  built the country’s first private sector high-rise, the 17-story Plasco Building in Tehran, Shiite cleric Mahmoud Taleghani objected to the idea that a Jew had built the tallest building of its time in Iran.

Khomeini’s protests went further than Taleghani’s. Khomeini railed against the White Revolution, a series of economic and social reforms Reza Shah’s son Mohammed Reza Pahlavi started in 1963. His attacks on the shah’s modernization efforts were also aimed at Israel, Jews and Baha’is. “The shah takes so many of his cues from Israel that we wonder if he is not a Jew himself,” Khomeini said during one speech against the reforms. In a 1964 address, Khomeini offered his antidote to westernizing Iran. “The objective is Islam,” he said. “It is the country’s independence; it is the proscription of Israel’s agents; it is the unification of Muslim countries. The entire country’s economy now lies in Israel’s hands; that is to say it has been seized by Israeli agents. Hence, most of the major factories and enterprises are run by them.” That speech singled out two people in particular: One was my grandfather, and the other was a famous Baha’i industrialist, Habib Sabet.

When Khomeini returned from exile in February 1979 as the head of the Islamic revolution, my grandfather was among the first civilians he went after. On May 9, 1979, my grandfather was executed after a 20-minute trial on trumped-up charges that included being a “Zionist spy.” The Revolutionary Court did not allow my grandfather to have a lawyer. After a firing squad killed him, the new regime stole what he had spent his lifetime building.  (Most of the rest of my family had already left Iran by then.) The execution prompted Sen. Jacob Javits (R-N.Y.) to sponsor a resolution condemning human rights abuses in Iran – which would prove to be a key moment in souring diplomatic relations between the U.S. and the new regime.

Habib Elghanian's execution was a turning point
Posted by bataween at Friday, April 24, 2015

Today marks one hundred years since the beginning of the Armenian genocide.

Interestingly, this is a subject where the government of Israel and its people have symetrically opposed views.

Turkish Jews, even though they were targeted at that and other times, still remember with gratitude that year in 1492 when they were not sent back to Spain.

Curry should have asked Zarif, when he talked about Iran's history of coexistence with Jews everywhere in the world, why that didn't apply to the Jews his regime was responsible for murdering in Buenos Aires in the 1994 AMIA bombing.

Anon, don't you know that Kerry and Obama are fakers and they don't care what happened or will happen to Jews because of the malevolence of the Khomeini regime still ruling in Iran?