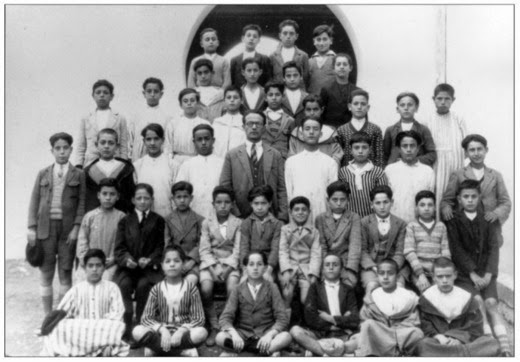 Children at the AIU school in Fez, Morocco

The best school in France is a Jewish school in the Paris suburb of Pavillons-sous-Bois run by the Alliance Israelite Universelle, the schools network founded in 1860 to educate the Jews of the Arab and Muslim world.

According to the school league tables for 2015, the 800-pupil AIU school scored a  100% success rate in the Baccalaureat exam.

The school outclassed the prestigious Louis Le Grand, Henri lV and Hoche lycees. Louis Le Grand, the alma mater of  Hugo, Voltaire, Robespierre and Diderot, Sartre, Durkheim and the French presidents Chirac and Pompidou, among other luminaries, was ranked fourteenth.

The AIU school principal, Dominique Dahan, said she was 'pleasantly surprised' at the results. The school has, for the last six years, achieved exceptional results, but this was the first time it had come top. Some 70 percent of the AIU pupils, most of whose families originate in North Africa, get scholarships to attend the privately-run school. Many come from eastern Paris by school bus. About 40 percent of school-leavers go on to study medicine.

In its heyday, the Alliance educated a million Jewish children in the Muslim world, combining Jewish studies with a secular curriculum and the teaching of English, French and Arabic. With the postwar exodus of the Arab and Muslim world's Jewish population,  all the AIU schools have closed their doors, except in Morocco where a AIU school still operates  in Casablanca. Nowadays, the AIU focuses its endeavours on educating Jewish children in France, Canada, Switzerland and Israel.

The Pavillions-sous-Bois school's success comes as the AIU's year celebrates 155 years since its foundation.


Point of No Return commenter Sylvia adds:
"As a beneficiary of that education during the tenures of Rene Cassin and Emmanuel Levinas at the AIU, I am proud and delighted, but not surprised.

"It is the more impressive that in addition to the French regular curriculum, the students at that school follow a solid Jewish largely Sephardic cursus.

"At a time when as a group we are being defined as amulet kissers, Baba Sali worshippers and muffleta eaters, it is nice to be reminded of that legacy of excellence. "
Posted by bataween at Monday, April 06, 2015

It is a high school (secondary)and the ranking is also linked to matriculation results.

Sorry I had missed that info in your article.

I count 153 years since the founding of the first AIU school in Tetouan, Morocco (1862).

The AIU also founded a school in Israel (outside of Jaffa) in 1870 and it is still in operation.

Yes that is the Mikve Israel agricultural school.
The AIU considers its founding year to have been 1860 - when six French Jewish intellectuals met to plan the network, but you are correct, Sylvia, that the first school opened two years later.http://www.jewishrefugees.blogspot.co.uk/2010/10/1000-come-to-alliance-israelites-150th.html

Oh, come on. So some artiste calls you "amulet kissers." Yeah, you'll never get a showing at his gallery. What of it?

another problem is that Herzog and Tsipi Livni were there. They spoke after Garbuz, as I understand, and said nothing to rebuke or contradict him.

This blog post quotes some more from Garbuz. It was not just amulet-kissers. He seems to have accused all rapists of being members of Likud and related parties.

I found this blog post which quotes more from Garbuz than usually quoted: