Yemini: There is no abyss between ethnicities

After all the abuse directed at Mizrahim in recent days, Ben Dror Yemini (himself of Yemeni-Iraqi parentage) steps forward (in a climb-down from a previous article slamming anti-Mizrahi elitism) to declare that there is no gulf between Ashkenazim and Sephardim /Mizrahim. We are simply witnessing extremists on both sides, mostly post- or anti-Zionists, amplified by the media, who are trying to bring down society by playing a race card. The reality, he writes in Y-Net News, is quite different.

There is a fascinating coalition between militants on both sides. They are trying, with great effort, to put together a conflict between Ashkenazim and Sephardim.
The former are returning to the days of old anti-Mizrahi racism, and the latter are excited by the "A Mizrahi votes for a Mizrahi" slogan. The former include types such as Prof. Amir Hetsroni, author and former actress Alona Kimhi, and the "Lo Latet" ("Don't Give") campaign, and the latter are intellectuals from the Mizrahi Democratic Rainbow who have turned Shas Chairman Aryeh Deri into their messiah. We should pay attention to the fact that most of the people taking part in this dispute, on both sides, are either post-Zionist or anti-Zionist. That's no coincidence. They are trying to sell us a split, racist society which is falling apart.

In the 1960s, Kalman Katzenelson published a book titled "The Ashkenazi Revolution," a slanderous lampoon by a revisionist who claimed that there are two people living in Israel: Supreme Ashkenazim and inferior Sephardim. It was an antithesis of the integration of exiles vision. The book wasn't a success. Katzenelson didn't represent the revisionists, and his new successors, Hetsroni and Kimhi, don't represent the Ashkenazim. Just like the Shas voters among the anti-Zionists don’t represent even one-quarter of the Mizrahim. 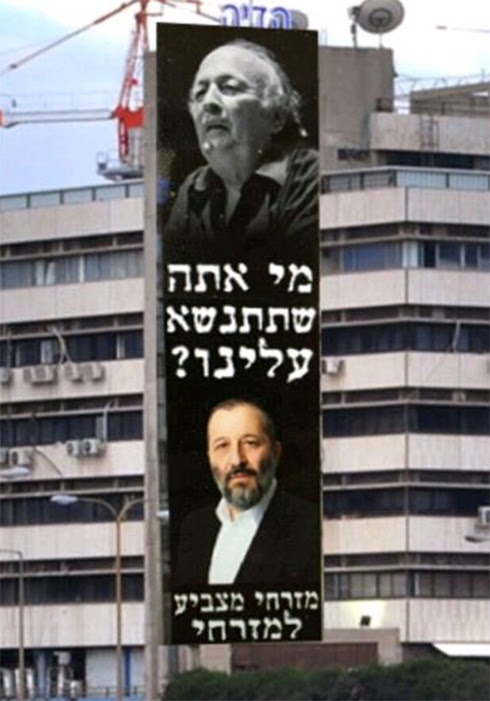 Over the weekend, two days ago, I attended a family event in one of Tel Aviv's satellite cities. A celebration for a daughter who has just been born. The mother is "mixed." She is neither Mizrahi nor Ashkenazi. The father is an engineer, a kibbutznik. There were many other similar couples there. The middle class. The elections were forgotten. It's seems that when you leave the bubble of the phalanges of the extremes, there is another life. It's a bit different. The newborn baby has no ethnic identity. There are many others like her, from Gideon Sa'ar to Dov Khenin, even when people don't know that's what they are.

Following the outburst of racism on the days after the elections, we have forgotten, and so have I, that the other Israel represents the majority. Eighty percent of the members of the golden age club already have "mixed" grandchildren and great grandchildren. Here and there, there are ethnic ghettos, mainly among the haredim, but for the rest this is a disappearing thing.

There is no need to cover up anything. There are still expressions of racism. There are remainders of the state racism we used to have here, which requires distributive justice. And certain elites, like the Supreme Court and the academia, are finding it difficult to change. Not because there are no suitable candidates, but because of the power maintenance mechanisms.

How the Israeli election awakened the ethnic demon (Huffington Post)

What's behind the Hetsroni story?
Article by Steve Plaut:

For the past 2 years, Amir Hetsroni has been the local hero of the Israeli Left because he was devoting his time to attacking Ariel University and appeared to be the victim of academic persecution by the school. The school is located in "occupied" territory in the West Bank, which enrages the Left. Hetsroni was on the faculty there in the department of communications until he was fired, and the firing was allegedly because of hostile comments he made in his classroom about and towards women.
In spite of the "political incorrectness" of those comments, he became a sort of rallying hero for the Left, which suddenly hailed him as a "victim" - indeed a martyr - of Ariel University's supposed intolerance of academic freedom. He was proclaimed the mascot of academic freedom by Haaretz (http://www.haaretz.com/news/national/.premium-1.612829).
Hetsroni went on a media crusade against the school, which he quickly expanded to a blanket endorsement of the entire agenda of the radical Left. He appeared to be choosing his increasingly extremist leftist rhetoric and political positions based on his anger at Ariel and his intention to escalate the vendetta against it. He filed suits against the head of the University and also against a professor at Ben Gurion University who had claimed he was mentally ill (that prof backed down and apologized). While Hetsroni had been considered somewhat Right-wing when he joined Ariel University, in his vendetta against the school he issued call after call for Palestinian statehood and ending "occupation." In this year's election he endorsed the Stalinist-jihadist Arab anti-Israel Unity Party.
In the past two weeks, Hetsroni went on a bizarre campaign of defamation against Mizrachi Jews. (see http://www.timesofisrael.com/academic-on-hot-seat-after-tirade-against-mizrahi-jews/). The police are threatening to indict him on "racism" charges. He was kicked off a TV show where he insulted a Moroccan Jewish woman crudely and described Israel in the 1950s as "opening her legs" in order to allow unfit Oriental Jews to enter the country. His unhinged vulgarity convinced many that he is mentally unstable. Some suggest he is deserving of pity rather than rage. He announced he was leaving Israel for Iceland in disgust at what Israel had become. He has not found any other academic position in Israel and is unlikely to find any.
The significant part of the story is that suddenly Ariel University has emerged as the good guy in all this. The Left had adopted the Hetsroni "cause" when he was fired by Ariel as a bludgeon to demonize the school. Now nearly everyone in Israel seems to understand that the school had made the correct call. Hetsroni really does not belong there.
Israeli leftists had been reprinting and posting every message of Hetsroni attacking the school and also the "occupation." But in light of Hetsroni's deranged ravings over the past two weeks, suddenly - ah so suddenly - the Left has lost all interest in identifying with and championing him and his "martyrdom.". I wonder why.