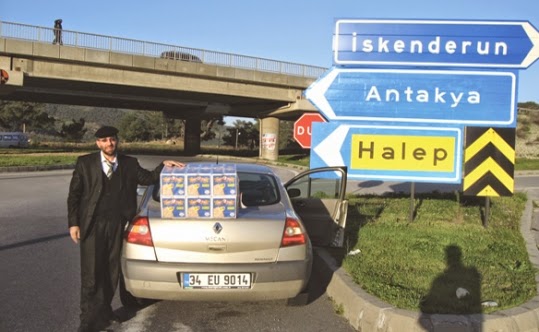 Rabbi Abraham Haim at the Turkish border with Syria with boxes of Matza destined for the tiny number of Damascus Jews. The photo was taken some years ago.


The Israeli press has reported that a mother and daughter were smuggled from Syria into Israel last year. It is likely that the mother lived outside the known  Jewish community - possibly a Jewess married to a Christian. The remaining 20 Jews caught up in the war-torn country have shown no intention of leaving. This year, as in previous years, they are being sent supplies for Passover.

The Jerusalem Post reports:
A mother and her daughter escaped from Syria and made aliya to Israel last year, Ma’ariv reported Friday after the news was cleared for publication by the censor.

Their escape via a neighboring country of Syria was facilitated by the Jewish Agency, and the two are now in an absorption center in the South.

Another daughter, who was turned down, returned to Syria. She had married a Muslim with children from a previous marriage and agreed to convert to Islam by a Muslim cleric. A source familiar with the situation explained that the second daughter’s request was denied because the Law of Return doesn’t recognize the right of Jews who convert to another religion to exercise their right to immigrate to Israel and automatically become a citizen.

By the morning of Feb. 19, Rabbi Abraham Haim had collected more than 300 pounds of Jerusalem-made matzah for delivery to Syria. Boxes of the traditional Jewish crackers were stacked up to the ceiling of his cramped apartment in Bnei Brak, a religious suburb of Tel Aviv.

A few days later, the matzah would travel on a plane with the rabbi to Istanbul, Turkey.

And by late March, just before Passover — “God willing,” said Haim — the matzah, repackaged in label-less brown boxes, will have made the journey, through rain and snow, to a Turkish border town near Aleppo, Syria. Turkish smugglers who work closely with Haim then plan to cross into Syria and hand-deliver the matzah to approximately 50 Jews who, according to Haim, still live in the urban center of Damascus. (Others with connections to the Syrian-Jewish community have put its population even lower, at around 20 people.)
Haim makes this Passover mission every year — “and every year, we have a miracle,” he said, sitting at his dining-room table in Bnei Brak. “I’m speaking by phone with these people, and every year, they tell me they got it, that it arrived.”

Read article in full
Posted by bataween at Friday, March 27, 2015