A Toulouse public swimming pool bears the name of Alfred Nacache, but how many of its users are aware of the extraordinary story of this man?
Several venues in France are about to pay tribute to this Algerian Jew who overcame his fear of water to become a champion swimmer. Deported to Auschwitz, he lost his wife and daughter but returned to France to run a gym which he used to store weapons for the new state of Israel.  Here's a taster in English of  a biographical article by Veronique Chemla. 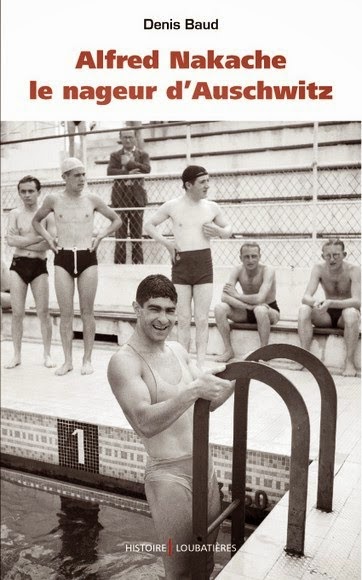 Alfred Nakache was born in 1915 into a large Jewish family in Constantine (Kabylia, Algeria). The Nakache family arrived from  Iraq in the nineteenth century to settle in this exceptional site overlooking a river, the Rhummel.

Around the age of ten, he manages to overcome his fear of water. Indeed he takes to water like a duck. Spotted for his physical stamina, Nacache is trained in the Olympic pool by two Frenchmen doing their military service in Constantine. After they leave Alfred Nakache continues training himself, hence his unorthodox approach. (He is disqualifed in one race for straying out of his lane.)

He takes part in local galas, and moving to Paris to attend the prestigious Lycee Janson de Sailly,  in 1935 becomes 100 m French champion.

He is one of 1, 000 Jewish athletes to take part in the 2nd Maccabiah Games in Tel Aviv in 1935, winning the silver medal in the 100 m freestyle crawl.

In 1936, after some hesitation, the Popular Front government decides to send a delegation to the Olympic Games in Berlin in Nazi Germany. Nacache's team comes fourth, ahead of Germany.

In 1937, Alfred Nakache does his military service in a battalion of top athletes and continues to win medals for France.

He marries a sporty childhood friend, Paula Elbaz in Paris, and together with his brothers joins the French army in 1939.

Under the Vichy regime, Jews are deprived of French nationality, and Nacache is forbidden from  exercising his profession, etc.

Fleeing Paris, he takes refuge in January 1941 in the free zone, in Toulouse, where he joined the prestigious club of the TOEC Dolphins.

Alfred Nakache and Paula make a living by running a gym in rue Paul-Féral.

In 1941, his career is at its height. He breaks records in France and Europe, and completes the world's 200 butterfly breaststroke race in 2'36 ''.

It it in his hometown that his daughter Annie is born.

Anti-Semitic persecution intensifies. On 26 August 1942, 900 Jews are rounded up in Toulouse.

While some press welcomes the records broken by Alfred Nakache, others call for his exclusion from national competitions because of his Jewishness. In Algiers spectators hurl insults. Alfred Nakache cannot compete there.

Under German pressure, the French Swimming Federation (FFN) ban Alfred Nakache from participating in the 1943 championships in France.

According to his brother Robert, Alfred Nakache seeks refuge in Spain with his wife and their daughter. But Annie cries so much that the couple return to Toulouse for fear of endangering the group they had joined on this journey.

On December 20, 1943,  Nakache is heckled at his home and his apartment plundered.  Entrusted to a municipal institution, little Annie is arrested by the Gestapo.

A man who claims to be his friend denounces Nacache. He and his family are deported to Auschwitz on 20 January 1944. Paula and Annie are gassed. Alfred Nakache is brought to Auschwitz labor camp III and then to the camp hospital. He befriends "Young" Perez,  born in Tunisia in 1911, and Noah Klieger. Deported from France, "Young" Perez is the youngest world champion in the flyweight boxing category in 1931.

To humiliate Nakache the Nazis force him to retrieve objects from dirty water.

As the Allies advance, he is forced on death marches.  "Young" Perez dies on one such march.

Alfred Nakache reaches Buchenwald. This camp is liberated on 11 April 1945.  Nakache arrives in Paris on 28 April 1945.

Shattered by the news of the murder of his wife and daughter, helped by his friends and his trainer Alban Minville, Alfred Nakache gradually resumes his training and teaches physical education.

Contacted by Abraham Polonsky, former head of the Jewish Army, he hides in his gym weapons for the future state of Israel.

He returns to competition at the highest level. July 1946:  he is French champion in the 200 breaststroke. He breaks the world record for the  3 x 100 m relay medley three with Alex Jany and Georges Vallerey. Participates in the Olympic Games in London (1948).

Alfred Nakache marries a young girl from Sete, Mary. He ceases his sporting career in the 1950s and devotes himself to his gym and to teaching.

In Toulouse he takes in family driven out of Algeria: the assassination in 1961 of the famous Jewish musician Raymond Leyris, known as Cheikh Raymond, marks the begnning of the end of the Jewish community of Constantine. Nacache's elderly parents cannot tolerate their uprooting and die soon after their resettlement in Toulouse.

Alfred Nakache  dies in Sete of a cardiac arrest on 4 August1983.

For information on the new book and documentary about Alfred Nacache and the programme of events being held in France in his memory, scroll down to the end of the French post.

What an example for the young generations of today. How did these people continue with their lives when they have lost everything. Thank you for sharing this wonderful story with me.