King Farouk of Egypt, who had a reputation for sympathy with his Jewish subjects, has been revealed to have been the man who encouraged  a secret army of Nazis to emigrate to the Middle East after WWll, according to The Scotsman: 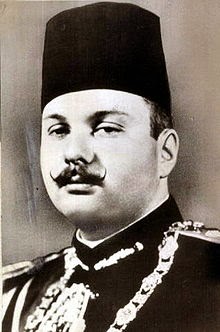 Intelligence officers, SS generals, propaganda specialists and even Holocaust functionaries went to Egypt after the collapse of the Third Reich to continue to persecute Jews.

Geraldine Schwarz, who has made a film on the subject called Exile Nazi: The Promise of the Orient, said the covert recruitment drive was the brainchild of Egypt’s King Farouk I.

“He commissioned a confidant to build a new army,” she told Die Welt newspaper. The king’s man was Adel Sabit, entrusted to build the anti-Israel force along with former Afrika Korps Lieutenant General Artur Schmitt. “The Arab League wanted it so,” she said.

Arabs failed in their first war against the Israelis in 1947, so the king and his ministers looked to “professionals” from Germany, as the old colonial powers of France and Britain were despised.

Mahmout Sabit, the cousin of Adel Sabit, told her at his home in Cairo: “The secretary-general of the Arab League decided the Germans were the best, with the most knowledge, the actual inventors of modern mobile warfare.”

He said Schmitt had been living after the war in a Cairo hotel under the name of Goldstein. His orders were to recruit his countrymen with the aim of building a million-strong army under a unified command structure and “common military ­doctrine”.

One report from Schmitt states: “The defeat of the Arabs against Israel was the result of an incompetent Egyptian leadership, which was not in a position to take advantage gained in the first week, to impose the force of their actions upon the Jews and destroy the State of Israel in a Blitzkrieg in a maximum of two weeks.”

Mr Sabit said Schmitt did not know Egypt’s neighbour Syria hired 50 Nazis between 1948-9, including many former SS soldiers, to help mould its army and intelligence service to rival Israel’s. One of the men it brought to Syria was Walter Rauff.

Rauff was, at the war’s end, the SS security chief for northern Italy, a wanted war criminal who helped develop mobile gas-wagons to kill Jews and other enemies of the regime.

“Allah in Heaven, Hitler on Earth” was a common slogan in Syrian capital Damascus during the war. It, too, wanted a German-led force to take on Israel, and Rauff was tasked with rebuilding Syrian intelligence services “along Gestapo lines”.

Read article in full
Posted by bataween at Sunday, March 08, 2015

Email ThisBlogThis!Share to TwitterShare to FacebookShare to Pinterest
Labels: Holocaust in Arab and Muslim lands, Jews of Egypt

http://www.spiegel.de/international/germany/world-war-ii-new-research-taints-image-of-desert-fox-rommel-a-484510.html (By Jan Friedmann May 23, 2007)

The Spiegel article refers to:
(1) https://books.google.com/books?id=8JiqNpE-Lz4C&printsec=frontcover#v=onepage&q&f=false Nazi Palestine: The Plans for the Extermination of the Jews in Palestine By Klaus-Michael Mallmann, Martin Cüppers
(2) a documentary previous to those at http://www.zdf.de/form/globale-suche-10.html?text=rommel&Suchen=&action=search

and a review in the New York Times!
http://www.nytimes.com/2015/01/11/sunday-review/old-nazis-never-die.html (By NICHOLAS KULISHJAN. 10, 2015)
The question for future researchers is how much influence the Germans had over these rapidly changing nations and their security apparatus. “The world as it is today was shaped after World War II, so the ’50s are a really key era,” Ms. Schwarz said by telephone from Berlin. “The Germans were advising the army, the secret service and the police at the moment when these countries were being built.”
--malca