How dangerous does Yemen have to become before the last Yemenite Jews decide to flee? Ynet News reports :

Israel is closely following developments in Yemen, where Gulf states are bombing Iranian-backed fighters, and has expressed deep concern over the fate of the last few Jews in the country.

Saudi Arabia and its allies launched a series of air strikes overnight Wednesday, battling Iranian-backed Houthi fighters who have captured swathes of the country. 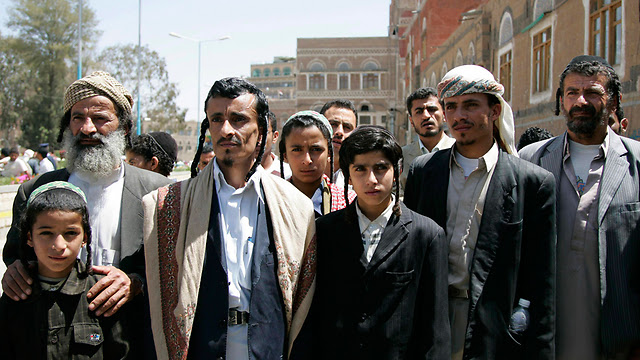 The Jews of Yemen (Photo: Reuters)

Israel believes that there are less than 100 Jews remaining in Yemen. Most of that number is concentrated in Sanaa, which has fallen to the Iranian-backed rebels.

The Foreign Ministry and the Jewish Agency have been in an ongoing state of frustration over the refusal of Yemen's Jews to leave, despite the risks there.

The Jews living in Yemen - most of whom had the opportunity to leave for Israel or another country, but refused – face an approaching danger from the advancing rebel forces, who have repeatedly made statements against Israel.

"We don't want to leave. If we wanted to, we would have done so a long time ago," Sanaa's chief rabbi Yahya Youssef said in February.

He did concede, however, that: "Since last September, our movements have become very limited for fear of the security situation."

Read article in full
Posted by bataween at Friday, March 27, 2015