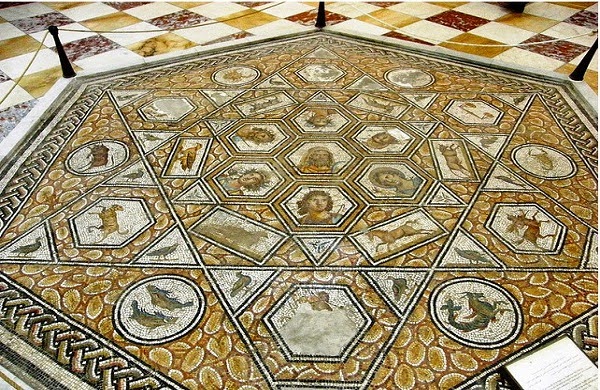 A terrorist attack in Tunis could have been targeting a room in the capital's Bardo Museum dedicated to Tunisia's Jewish heritage, Le Monde Juif speculates.

Seventeen tourists and two Tunisians were killed by gunmen with Kalashnikovs. The attack ended on the afternoon of 18 March.

Some 100 tourists had been in the museum, which is in the same compound as Tunisia's parliament building. Most had been evacuated, said a spokesman.

In 2002, a terrorist attack on the Ghriba synagogue on the island of Djerba killed 19 people, almost all German tourists.

Did the perfectly mainstream Muslim activists{not "terrorists" by THEIR standards}'target the Jewish collection'? Of course they did: And anything and anybody else THEY could lay their paws on. What is obviously emerging out of the self-propelled flush of Muslims into the sewers of history,is that THEY no longer even go through the pretence of practising the most elementary levels of civilized restraint. As poll after poll has revealed over the decades,the percentage of Muslims, everywhere & anywhere on the planet,who support & celebrate these daily events,both overtly,financially & indirectly, is so large,that no thinking person can possibly call it the behaviour of an insignificant "minority". Nor can THEIR targets of opportunity simply be labelled as "Islamophobic haters"; Following expressions of natural revulsion at the daily practices & behavioural patterns of the followers of Islam. As if it is some sort of crime to discover the globally endemic Islam/Muslim problem. Even though we were not necessarily even looking for it. Indeed, attempting to close our eyes to it.
Nothing less than a world-wide programme of local self defence, behaviour-mod and networks of "cordon sanitaire"
can come to grips with THEM. And the largely liberal-left self-loathing dhimmis who grovel & pander to them. Often these poor fools wind-up sacrificing their lives in the process. Examples are countless.
Is there any body left who doesn't understand what has to be done ? Starting at the most local levels. It's a global war WE didn't choose. Not a debating society in the rancid chambers of junk academe;Or the u.n. chamber pots.
Norman L. Roth, Toronto Canada

At least they are honest and don't hide behind pretexts of civility.
--malca

http://www.germany.info/Vertretung/usa/en/__pr/P__Wash/2015/02/24-Foundation-Statement.html
In the present case, the Foundation has handled the claim to the Guelph Treasure in accordance with the Washington Principles, the Common Declaration, and the Guidelines, and concluded that the property at issue was not confiscated by the Nazis. Nor was it part of a forced sale or transfer under duress or coercion by the Nazis.

http://washingtonjewishweek.com/20304/hitlers-trove/
According to the allegations in the 71-page civil suit that was filed Feb. 24 in U.S. District Court for the District of Columbia against Germany’s government and the Prussian Cultural Heritage Foundation, the owners of a consortium of three art dealer firms sold 42 pieces of art worth $250 million in June of 1935 “via a manipulated sham transaction” that was “spearheaded by Dresden Bank, which was acting on behalf and by order of the two most notorious Nazi leaders and war criminals,” Hermann Goering and Hitler.

The “coerced sale” included a payment of less than 35 percent of the value. That payment was then subjected to flight taxes that were demanded so the Jewish dealers could flee Germany, the lawsuit states.