Another renovated synagogue, but fewer Jews 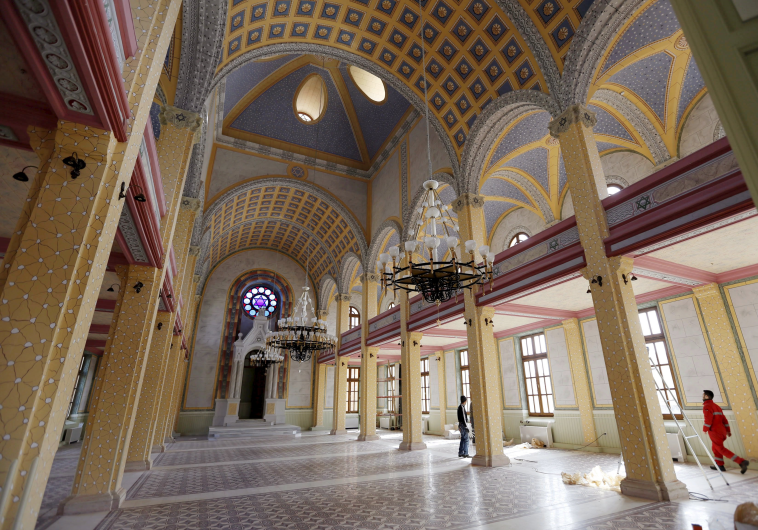 
As the renovated Edirne synagogue is unveiled, Turkey joins the ranks of those Muslim countries giving priority to beautiful but empty Jewish buildings over a thriving community of actual Jews. Article in the Jerusalem Post: (with thanks: Heather)

EDIRNE, Turkey - When the domes of Edirne's abandoned Great Synagogue caved in, Rifat Mitrani, the town's last Jew, knew it spelled the end of nearly two millennia of Jewish heritage in this Turkish town.

As a boy, Mitrani studied Hebrew in the synagogue's gardens and in the 1970s, dispatched its Torah to Istanbul after the community shrank to just three families. In 1975, he unlocked its doors and swept away the cobwebs to marry his wife Sara.

"Only I am left. It happens slowly, becoming the last one," said Mitrani, 65, whose family fled here more than 500 years ago.

Now a five-year, $2.5 million government project has restored the synagogue's lead-clad domes and resplendent interior ahead of its Thursday re-opening, the first temple to open in Turkey in two generations, but one without worshippers.

It is part of a relaxation of curbs on religious minorities ushered in during President Tayyip Erdogan's 12 years in power.

Yet it coincides with a spike in anti-Semitism in predominantly Muslim Turkey and a wave of Jews moving away, say members of the aging community, which has shrunk by more than a third in the last quarter century.

The increase, observers say, is linked to anti-Israel sentiment which reached a crescendo during Israel's Gaza offensive in July. Erdogan compared Israel's assault on Palestinians to "genocide" and "Hitler's barbarism."

He drew distinctions between Israel and Turkish Jews, yet his words helped stoke outrage, and local Jews were threatened by public figures and pro-government newspapers.

Turkey's Jews, most of whose ancestors sought refuge here from the Spanish Inquisition, are on edge. Their schools and synagogues are behind security tunnels, shielded by steel blast protection.

"They have lived in a state of fear for a long time after terror attacks and the feeling that they are not treated as Turkish citizens. There is worry for the younger generation," said Ohad Kaynar, Israel's deputy consul general.

Louis Fishman, an expert on Turkish affairs at Brooklyn College in New York, saw evidence of government indifference to anti-Semitism. "Buildings might be protected but the people who visit them are subjected to regular hate speech and threats," he said.

Erdogan's spokesmen and other officials did not respond to requests for comment for this article. However, the Turkish government has been at pains to distinguish between its Israel policy and its attitude towards Turkey's Jewish population.

"Regardless of the fact that we identify ourselves as Turks, we are still perceived as foreigners. Tensions between Turkey and Israel directly impact us," said Karel Valansi, a political columnist with Salom newspaper.

Read article in full
Posted by bataween at Thursday, March 26, 2015

In a strange way, I'm sort of glad that Turkish-Israeli relations are the way they are right now. It will give Israel the opportunity to openly side with the Kurds, Assyrians, and Armenians, who will be much better friends to Israel than the Turks. It also gives the opportunity for Israel to erase its shame and recognize the Armenian genocide already. - DS

In a strange way, the inside of this splendid synagogue structure remind me of the outside of the Galleria Uffizi in Florence.

In a strange way, the inside of this splendid synagogue structure remind me of the outside of the Galleria Uffizi in Florence.