More than 100 clay tablets give a glimpse into the life of the 80, 000 Jewish exiles who settled in Babylon some 2, 500 years ago. Haaretz has more about the Babylonian Exile exhibition now on at the Bible Lands Museum in Jerusalem. 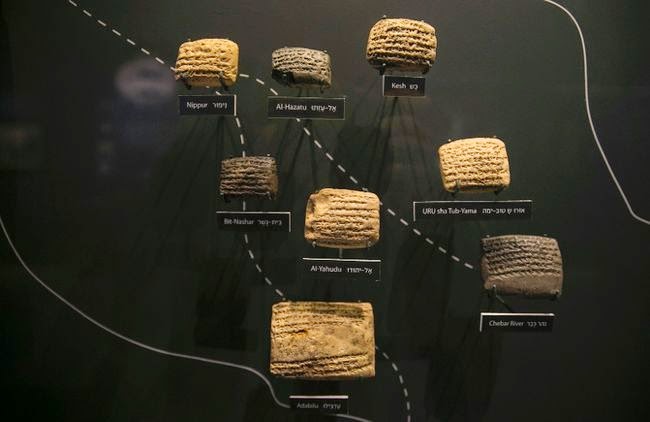 A little known collection of more than 100 clay tablets in Cuneiform script, dating back to the Babylon Exile some 2,500 years ago, was unveiled this week, allowing a glimpse into the everyday life of one of the most ancient exile communities in the world.

Prof. Wayne Horowitz, one of the archaeologists who studied the tablets, says this is the most important ancient Jewish archive since the discovery of the Dead Sea Scrolls.

The tablets are on display in an exhibition entitled “By the Rivers of Babylon” that opened this week in the Bible Lands Museum in Jerusalem.

The collection consists mainly of administrative certificates – sales bonds, contracts and addresses, engraved in Akkadian Cuneiform script on clay tablets, some of which were fired in kilns.

Thanks to the Babylonian custom of inscribing each document with the date, according to the monarch’s years in power, the archaeologists could date the tablets to 572-477 B.C.E. The earliest tablet in the collection was written some 15 years after the First Temple’s destruction by Nebuchadnezzar, the Chaldean king of the neo-Babylonian era, who deported the Jews to Babylon. The latest was written some 60 years after the return of some of the exiles to Zion, which was enabled by Persia’s King Cyrus in 538 B.C.E.

Little is known of how the collection was discovered. Archaeologists assume it was dug up in the 1970s in southern Iraq and surfaced in the international antiquities market. It was divided into three parts. Collector David Sofer bought 110 tablets, about half of the collection, which pertains mainly to the Jewish community. Sofer lent the tablets to the Bible Lands Museum.

Two books about the collection were recently published – “Documents of Judean Exiles and West Semites in Babylonia in the Collection of David Sofer” by Prof. Laurie Pearce (CDL Press), who also translated the tablets into English, and “By the Rivers of Babylon,” by Horowitz, Yehoshua Greenberg and Peter Zilberg, published by the Bible Lands Museum and the Israel Exploration Society.

The documents reflect a settlement bloc of several villages between the Euphrates and Tigris rivers. One of the villages is named in the tablets as Al-Yahudu, a term Babylonian sources use to describe Jerusalem.

“This is ‘Babylon’s Jerusalem,’ just as New York is the new York,” says Horowitz. Al-Yahudu’s residents are Jews, as their names indicate – Gedalyahu, Hanan, Dana, Shaltiel and Netanyahu. Some of the names appear to be inspired by Cyrus’ declaration allowing the return to Zion, like Yashuv Zadik or Ya’aliyahu, he says.

Until now very little had been known about the life of the Judean community that had been uprooted from Jerusalem and deported to Babylon. The collection also corresponds with the Biblical text in which the prophet Ezekiel writes “as I was among the captives by the river Chebar” (chapter 1, verse 1). The “river Chebar” or “river Chebar village” appear several times on the tablets.

The tablets reflect trade transactions, leasing houses and fields, addresses, inheritances, etc. Certificate 31, for example, is of a deal between Yirpa Ben Dohah and Ahikam Ben Refa’iyahu, in which the former trades a “trained, five-year-old bull” for “one gray jennet.” In certificate 52 a man called Ikisha sold his female slave for “three pieces of silver.” In another document, Neriayu Ben Ahikam rents a house for “10 silver shekels ... half given at the beginning of the year and the rest in the middle of the year.” The tenant undertook in the agreement to pay for damages, if any, from the foundations to the roof.

On some tablets, ancient Hebraic letters appear beside the Akkadian details.

Read article in full
Posted by bataween at Wednesday, February 04, 2015