Stand by for Jethro's feast for Boys 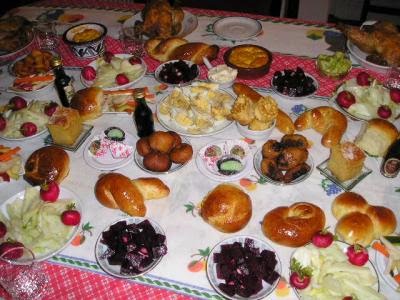 This feast, which consists of a large selection of dainty, child-sized dishes of typical fare, is special to Jews from Tunisia and is celebrated wherever Tunisian Jews  congregate - in France and Israel.

It's the second festival of a winter trilogy: the Girls' Feast, the Boys' Feast, and the Bsissa of Rosh Hodesh Nissan, the new moon of the month of Nissan.

The origins of the Seudat Yithro are obscure but date back at least to the start of the 20th century. Some say it was initiated to mark the miraculous end of a plague. Others say it is to recall the meal that Jethro, Moses' father-in-law, prepared for him and his brother Aaron. (Do Jews really need an excuse for tucking into good food?)

Above all, the feast is for the children. Boys are  made to recite the Ten Commandments. After the meal, they recite the blessings, also on Jethro's sheet of paper. They eat special Tunisian sweets such as Yoyo, Makroud, Honey brik and Debla or Manicotti.

Jews from some towns in Algeria, such as Tlemcen, also observe this festival with chicken cooked with couscous (Hag Sion, a corruption of Hag Siyoum, the letters S Y M standing for  the feast of Yithro and Moshe) . On the Tunisian island of Djerba, the festival is called Hinuch le Nayar (Educating the Young).

Some rabbis object to this festival, as it has no sources in the Torah.

The seventh day of Hanucah is Tunisian girls' Day

The special feast of Yitro is celebrated by Jews from Constantine in eastern Algeria, which is close to Tunisia. A synagogue in Paris in the Marais quarter has many Constantinois congregants and celebrates Parashat Yitro with a feast on Shabbat after the morning service. I won't be more specific about which synagogue for understandable reasons.