With thanks: Michelle Malca 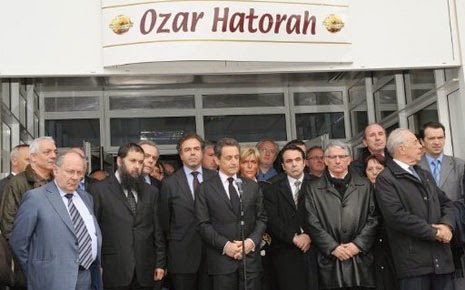 Nicolas Sarkozy, the then French president, makes a speech following the terrorist attack on the Ozar Hatorah school in Toulouse, France

Western education arrived in the Jewish communities of the Arab and Muslim world with the establishment of the Alliance Israelite Universelle (AIU). But the Alliance emphasised secular studies. The road to salvation for these Jews, it believed, was through cultural assimilation.

In 1944 the Ozar Hatorah schools network was set up to plug the gap. Its aim was to provide primary Jewish education, which it did later on for the Alliance Israelite schools.

Ozar Hatorah was first set up by a Syrian-born manufacturer living in New York - Isaac Shalom - together with Joseph Shamah of Israel and Ezra Tuebal of Buenos Aires. Later, the American Joint took over the funding of the network. After the creation of the state of Israel, Ozar Hatorah closed its 29 schools there and focused on Iran and the Arab countries.

Iran's Jewish community was in particular need of spiritual attention - the community was poor, knowledge was abysmal, and the religious leadership  decimated by the forced conversions of the 19th century. Forty schools were founded there, with 8,600 pupils. The Libyan schools closed with the mass migration of the community in 1951. In Syria, two schools in Damascus and Aleppo had 350 pupils in the early 1970s. The Damascus school was singled out for the best marks in the country. In Morocco, 60 percent of Jewish children attended Ozar Hatorah schools.

Ozar Hatorah followed the mass migration from North Africa into France from 1961. It set its sights on creating schools in North and South America.

The Ozar Hatorah school in Toulouse, France, was the scene of a terrorist attack in March 2013. Three children and a rabbi were killed.

From the Aryeh Kaplan reader

Posted by bataween at Wednesday, February 11, 2015